Unfortunately, Hostiles is a film whose enormous meaning will prove to be a bit tedious to many members of the audience. 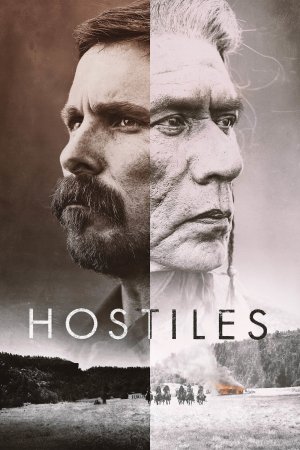 Taking place in 1892, Hostiles tells the story of an Army Captain with no love of Native Americans who has been assigned to escort a Cheyenne Indian Chief and his family from New Mexico to Montana. While it falls short of the incredible story told in the legendary TV series Lonesome Dove (1989), it has historical significance that simply can’t be avoided.

One of my favorite actors, Christian Bale, plays Captain Joseph Blocker, a soldier who has been fighting and killing Native Americans most of his professional life. He hates his orders that require him to protect a former foe, particularly since the two of them have been protagonists for years. He doesn’t remotely care that the Chief has been diagnosed with cancer and his time on earth is limited.

Before the Captain and his small group of soldiers can begin their journey, the camera flashes to a family of settlers who are attacked by a group of renegade Indians. The very talented Rosamund Pike plays the mother, and you watch her anguish after her husband and three small children are killed.

Captain Blocker’s journey intersects with the emotionally destroyed Ms. Pike, known as Rosalie Quaid. He has her join him in his group and from that moment you follow them on a quest that leads you to feel that they are fighting to avoid Dante’s Inferno.

Mr. Bale is one of the great actors working today, and you only have to watch his contributions to such a wide range of films as last year’s The Promise, The Big Short (2015), American Hustle (2013) and his Batman films where he played Bruce Wayne. Additionally, Ms. Pike is equally accomplished as reflected in The World’s End (2013) and one of the most overlooked movies of last year, A United Kingdom. I should mention Gone Girl (2014), particularly since she played Ben Affleck for the fool that he has regrettably impersonated in other performances.

I have had a romantic attachment to American history that covers a period of pre-Revolutionary War America to the late 19th century. There have been many movies that have captured my attention, but let me just recommend that you see both Northwest Passage (1940) and Guns Along the Mohawk (1939). Both films vividly portray the difficulties faced by settlers and early adventurers as they dared to live in the wilderness, and we live in a country today that is a direct product of their determination and courage.

But what makes Hostiles a tough movie to watch for those without my taste of history is the fact that nearly all of Captain Blocker’s comrades are killed before his mission ends. You simply have to be prepared for scene after scene where the survivors are left in agony.

Regardless, let me close with two observations. The first is that the legendary Wes Studi plays the cancer-ridden Indian Chief, and he brings a dignity to his role. From my standpoint, I will never forget his memorable performance as Magui in The Last of the Mohicans (1992), where he played one of the great villains to appear on the screen. He was dedicated to killing all white men which included Hawkeye (Daniel Day-Lewis), and you will seldom see any film where you admire the person that you hate.

However, the value of Hostiles is that it captures the history of our country that is still ignored. While we listen to an American president who vilifies immigrants, we conveniently forget that we live in a country where we are the original immigrants. We came here uninvited and proceeded to engage in the systematic persecution of Native Americans who had declared America their home for centuries. From President Andrew Jackson and his tragic removal of Native Americans from the Southeast to across the Mississippi known as The Trail of Tears to a demonic program to eliminate all buffalo, their food source, in order to put them on reservations, our ancestors demonstrated that the most violent immigrants in the history of our country was us.

The value of Hostiles is that it tells that story. While it was Native Americans who brutally killed Ms. Pike’s family, the film ends with a scene where white landowners in Montana did the exact same thing to Native Americans who they wanted to exclude from their land.

Simply stated, we cannot begin to understand the discussion of immigration today without understanding our own history. One of my grandmothers spoke German with the help of a bit of broken English. Need I say more?

← Maze Runner: The Death Cure
Commentary on the Oscar Nominations →