Though dying at the box office, even Casablanca told a great story that involved a woman in love with two men. 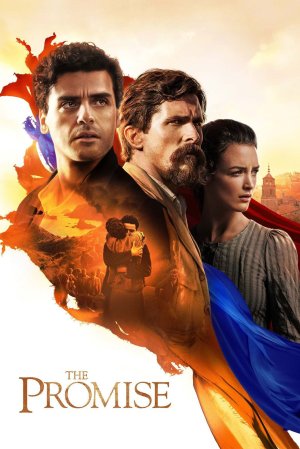 Set in Turkey at the outbreak of World War I in 1914, The Promise centers on a love triangle taking place in the middle of the Armenian genocide. Ironically, the love story becomes a bit of a distraction as you watch the Turkish government execute over a million Armenian men, women and children.

It is interesting to note that the same subject was loosely treated in last year’s The Ottoman Lieutenant, which also hinged on two men attracted to the same woman. However, that film danced around the edges of the Turkish slaughter of Armenians, something that the Academy award winning Director Terry George does not dodge.

In The Promise, Michael (Oscar Isaac), an engaged Armenian, travels to Constantinople to study medicine. There, he quickly falls in love with Ana (Charlotte Le Bon), the girlfriend of a distinguished American journalist played by Christian Bale. Ana has an Armenian background, and she is left wrestling over her admiration for Mr. Bale’s Chris Myers and her passionate attraction for Michael.

Yet love is not a very splendid thing in Turkey at this time, and you watch in horror as the Turkish army rounds up Armenian intellectuals in the downtown streets of Constantinople. Michael disappears after being taken into custody while Chris begins a journey to report the atrocities being hidden by the Turkish government.

What unfolds is a tale of a massive tragedy. Armenians are transported in railroad boxcars to slave labor camps in much the same fashion as the Nazi treatment of Jews in World War II. Though tortured and abused, Michael escapes as he seeks to find a way to try to save his family in Southern Turkey. The movie leaves you appalled as Michael and others eventually learn the fate of their entire families.

Christian Bale is one of today’s most accomplished actors, and he paints the picture of a man who tries to hang on to a lover while refusing to be distracted from his goal of telling the world about the genocide that Turkey is trying to keep secret. Mr. Isaac’s performance stands right with Mr. Bales’, and he is left in complete despair as he is forced to choose between a dedicated wife from a forced marriage and the woman of his dreams.

However, Ms. Le Bon’s Ana is the focal point of this film around which everything else revolves. She has previously given wonderful performances in The Walk (2015) and last year’s Anthropoid, and she radiates an energy that leaves you transfixed as you watch her wrestle with trying to help Armenian children survive and the consequences of loving two strong, conscientious men.

Whether the love story in this movie weakens it for you or not, it has undeniable historical significance. It is past time that we force Turkey, now our NATO ally, to acknowledge its attempt to butcher Armenian citizens in World War I.

Then again, Turkey will probably tell us to keep our mouths shut until we apologize for building our country on slave labor and the genocidal elimination of millions of Native Americans. I guess we don’t have clean hands either.

← Gifted
The Fate of the Furious →