Rating: Joins The Way, Way Back as one of the best movies of the Summer. These boys live by the pledge, “Stay thirsty, my friends.”; 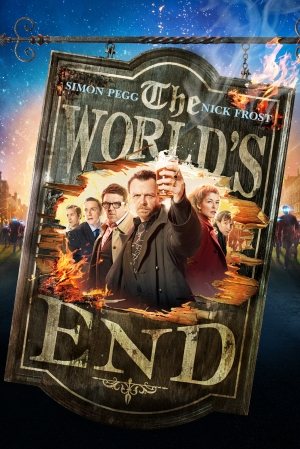 Most devoted movie fans know that we all have a bit of a twisted soul. Many of those in our extended community who don’t share our passion for the cinema view us with a bit of perplexed disdain. I’ve tried to analyze this disparity, but I can only respond with John Cleese’s retort in Monty Python and the Holy Grail (1975), “Your mother was a hamster and your father smelled of elderberry!”;

So for those of you dying to see a raunchy, totally unpredictable  comedy where five middle-aged Englishmen go on a drunken pub crawl that is interrupted by an unknown alien infestation, then you have to see Edgar Wright’s The World’s End. Simon Pegg and Nick Frost are again as loveably manic as they were in their prior films Shaun of the Dead (2004), Hot Fuzz (2007) and Paul (2011). Neither tries to hide their human weaknesses, instead embracing their failings as a badge of honor.

Here, Mr. Pegg plays Gary King, a 40ish loser who appears to be what lies in Sutter’s future in this year’s The Spectacular Now. He has never escaped his adolescent years, still driving a 20-year old car when not drinking heavily.

Haunted by the memory of 20 years earlier when he and four friends attempted a failed quest to get loaded in their hometown’s 12 taverns, he wants to try once more to get the job done. All of his old colleagues are reluctant to join him for obvious reasons. Most are employed, married or both, and they view the whole suggestion of recreating their debauched youth as being absurd. Nonetheless, to err is human, and all men run from a DNA defect known as human weakness.

The five return to their hometown, hoping to now make it to the last bar, fittingly called The World’s End. With the exception of Mr. Frost’s character, Andy Knightley, they all gladly embrace intoxication. Mr. Frost, not having consumed alcohol in over 10 years, initially drinks nothing but water as he regrets his decision to join old friends.

But as the boys hit the bars, they gradually see that something is wrong with many of the town’s residents. Following a fight in a tavern bathroom, they discover that aliens have turned many of the residents into robots, and our lads are stuck in the middle of life-threatening turmoil.

Regardless, you want to embrace all of the boys, particularly as they refuse to end their pub journey. They all get increasingly intoxicated, including Mr. Frost, who decides that a confrontation with aliens justifies ending his abstinence.

Eddie Marsan, Paddy Considine and Martin Freeman round out our loaded band of brothers, and not all of them can escape the robot attack. Rosamund Pike also stands out as a town resident and a former lover of two of the boys, and the intoxicated Mr. Pegg dodges the aliens as he seeks to relive a moment in the past where he and Ms. Pike had sex in a tavern’s bathroom stall. Ms. Pike is not amused.

What provides the great surprise of the film is the interaction of our gang with the leader of the aliens. From the aliens’ viewpoint, humans are the most regrettable form of life in the universe, never seeming to do anything but abuse the concept of freedom. Mr. Pegg, fighting for his life while refusing to give up on his goal of drinking in every tavern, can only respond with words to the effect, “It is every human beings right to be a complete f – -k up.”;

As noted, The World’s End picks up unanticipated steam right down to the very end. It is as funny as it is moving, and our boys have to face an unanticipated future where Earth suffered the anger of the departing aliens.

No devoted movie fan should miss this film. And who really cares what our critics say. After all, I have never hidden the fact that if I could get half of the emotional satisfaction in a house of worship that I do in a dark movie theater, I would be one of the world’s great holy men!

← The Spectacular Now
You’re Next →