A Most Violent Year

You are not likely to see a more attractive married couple than Oscar Isaac and Jessica Chastain performing in an otherwise forgettable film. It proves the old saying, “Beauty is only skin deep.” 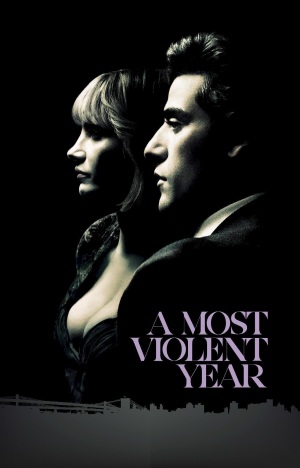 Taking place in 1981, A Most Violent Year describes New York City as a metropolis awash in violence. Death appears around nearly every street corner, greeted by a political response that amounts to little more than a hopeless shrug.

The film attempts to recreate Francis Ford Coppola’s Godfather trilogy but fails at every turn. Though well acted, the roles are largely superficial and one-dimensional. If you fear I am overreacting a bit, contemplate the male star of the film appearing in nearly every scene wearing the same expensive brown overcoat.

Oscar Isaac plays Abel Morales, the owner of an oil distribution company that is trying to expand. A fundamentally decent guy who wants to live within acceptable social standards, his company faces disaster when its trucks are repeatedly hijacked by an unknown foe.

The entire film is best described as Mr. Isaac’s attempt to identify his enemy. Helped by his personal attorney, a largely unrecognizable Albert Brooks sporting bad hair, he is also pursued by a Prosecutor with one eye on justice and the other on his political future.

Ironically, the Prosecutor is played by David Oyelowo, recently snubbed by the Oscar Academy for his brilliant role playing Martin Luther King in Selma. Here, seeking to indict Mr. Morales on questionable legal grounds, you can’t help but feel that he is performing with the thought, “Okay, Academy, if you won’t reward me for a great performance, how about an average one?”

The subplot of the film centers on Mr. Morales’s relationship with his gorgeous wife Anna, played by the talented Jessica Chastain. Here, playing the daughter of an unseen father with a dark, violent past, she clearly is an apple that hasn’t fallen far from the family tree. Serving as her husband’s bookkeeper with a calculator in one hand and a gun in the other, it is not an exaggeration to say that Ms. Chastain adds to her acting legacy performing in a film that focuses far more on her ample breasts than her acting skill. (Not that I noticed!)

I have long stated that January is a wasteland where expensive cinematic dinosaurs go to die. Despite the success of American Sniper, this film joins that unfortunate crowd.

And that should be a warning for Mr. Isaac. You are an actor with great possibilities, but you now follow-up last year’s overrated Inside Llewyn Davis with this lackluster film. Come on, Mr. Isaac, it’s time to break free from directors who only want you to play a New York character wrapped in outdated stereotypes. The Coen Brothers didn’t do you a service in Inside Llewyn Davis, and Director J. C. Chandler makes the same mistake here.