There isn’t much to find inside, or outside, Llewyn Davis. At least he likes cats. 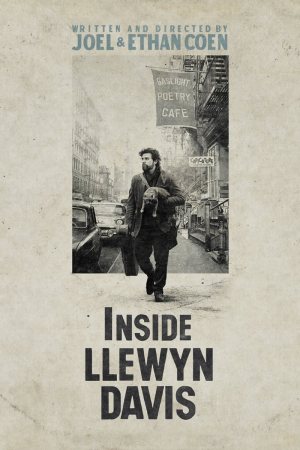 The trouble with the Coen Brothers’ Inside Llewyn Davis is that its many fascinating parts do not add up to a great movie. Worth seeing for the wonderful music alone, there just isn’t much about the lead character to like.

As many of you have seen from movie critics around this country, most have waxed eloquently about Llewyn Davis. Obviously, the Coen Brothers deserve every ounce of respect they receive, as they have brought us a list of superior films.

Raising Arizona (1987), Fargo (1996), The Big Lebowski (1998) and O Brother Where Art Thou? (2000) are legendary. The central characters in all of those films were flawed but loveable, and you were left laughing despite the heartache and occasional brutality.

Additionally, they repackaged True Grit (2010) with character and style, and A Serious Man (2009) was a tiny gem as it studied human dysfunction dripping with Jewish sarcasm.

Yet while No Country for Old Men (2007) was a recognized masterpiece principally because its lead character was an iconic, pathological killer, the fact remains that the Coen Brothers have brought us a number of likeable but rather average films. George Clooney was great in Intolerable Cruelty (2003), but the movie wasn’t. The Lady Killers (2004) and Burn After Reading (2008) are not likely to be DVD’s that you save at home, and both Barton Fink (1991) and The Hudsucker Proxy (1994) are eminently forgettable.

Unfortunately, I feel that Inside Llewlyn Davis falls into that latter category. Yes, Oscar Isaac is wonderful playing Mr. Davis, and he has a great voice. However, as the film follows him through Greenwich Village in 1961, he appears to be little more than a human train wreck.

He’s broke, has one set of clothes and no place to live. He always has to bum off friends or relatives, and his lack of appreciation leaves him appear to be an annoying S.O.B.

Having said that, the movie has some great individual scenes, most of them involving Carey Mulligan and Justin Timberlake. The scenes when Timberlake and Isaac are singing together provide the strength of the film.

As for Ms. Mulligan, she is a knockout, playing Timberlake’s girlfriend who has had an unfortunate affair with Isaac. The consequences are dramatic, and the one thing you will remember about this movie is Mulligan’s spectacular use of profanity that she regularly hurls at Isaac.

The British born Ms. Mulligan has a series of movies that you should take in if you have not already done so. I loved her in An Education (2009), Public Enemies (2009), Never Let Me Go (2010), Drive (2011) and this year’s The Great Gatsby. She is a combination of intelligence and natural beauty that the screen embraces.

However, what the screen didn’t embrace in Llewyn Davis was the ridiculous performance of John Goodman as a demented heroin user. Goodman is an extraordinarily good actor, but he is completely wasted here. While this dances on the edge of being mean spirited, the Goodman episode looked like it was added because the Coen Brothers ran out of creative juice.

Isaac’s Davis was obviously a depressed man for tragic reasons that I won’t give away, and you couldn’t help but feel that he would be on medication had he been living in 2013. Though he constantly fought to gain recognition as a folk singer, he didn’t seem to really care. Wearing the same clothes throughout the film, I was left wondering when he ever washed them.

Regardless, hunt down the music, but I would suggest that you wait to see the movie at home.