Commentary on the Value of Books

As much as I love films, there are times when it is hard to justify sitting in a dark movie theater. Yes, the Avengers sequel has been a big hit, but so what? Our growing family of heroes once again unite as a new villain tries to destroy mankind, so I’ve largely put myself on hold until Pitch Perfect 2 and the new Mad Max starts after my deadline.

“Five Came Back” by Mark Harris 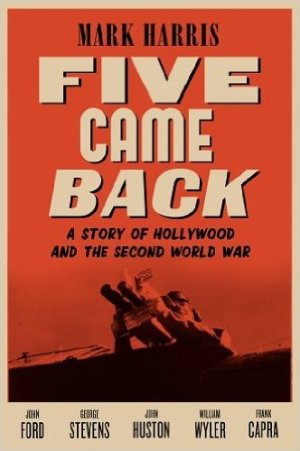 On the other hand, that is a good reason to visit several great books relating to the movie industry that are both madly informative and wildly entertaining. Let’s start with one of the best books I have read in a while, “Five Came Back” by Mark Harris. It is an extraordinary tale of five memorable Hollywood movie directors who enlisted in World War II as they put their careers on hold.

To begin with, these were not ordinary guys, as we’re talking about Frank Capra, John Ford, John Huston, William Wyler and George Stevens. By the time the Japanese attacked Pearl Harbor on December 7, 1941, they had already directed a variety of films that are remembered to this day.

Mr. Harris gives a wonderful account of how our boys enlisted in order to find a way to make films that inspired both soldiers and U.S. citizens. While Mr. Capra served as the organizational leader working out of Washington for the length of the war, the others ventured overseas where they put their lives on the line.

Mr. Ford, who won his record-setting fourth directing Oscar for The Quiet Man in 1952, remains a legendary figure in the movie industry. Though he disliked John Wayne because the latter found convenient excuses to remain ineligible to serve in World War II, he ended up directing Wayne in a series of classic westerns that remain relevant to this very day. If you haven’t seen The Searchers (1956), Fort Apache (1948) or She Wore a Yellow Ribbon (1949) then please do so.

Shortly after Pearl Harbor, Ford volunteered to be a part of a crew who were sent on a dangerous mission in the Pacific. He ended up on Midway in the middle of 1942 where he was wounded while filming the battle that actually turned the war against the Japanese. Sure, no one admired Ford more than himself, but few directors rivaled his accomplishments.

George Stevens was never the same after the war. Before, he largely directed comedies such as the critically praised film with Katherine Hepburn called Woman of the Year (1942). Unfortunately, he followed the Allied troops through the D-Day invasion, and was accidentally a member of the group that liberated Dachau. He filmed it, and the horror remained a part of his life.

After the war, Mr. Stevens made some tremendous films like Shane (1953) and Giant (1956), but Mr. Harris reminds us that Stevens’s films of Dachau were played during the Nuremberg trials that followed the end of World War II. Mr. Stevens is a man to be remembered.

And then there is John Huston, a rogue and womanizer who also happened to be a fabulous Director. Largely unknown before the War, he went on to win an Oscar in 1947 for his direction of The Treasure of the Sierra Madre. He followed with acclaimed films like The African Queen (1951), but his attempts to document the mental illnesses of many returning veterans was regrettably shelved by the War Department.

And then there was William Wyler, a movie director who deserves a place in your heart. Before the war broke out, he directed the extraordinary Mrs. Miniver (1942), for which he won an Oscar while serving overseas. His wife accepted his award in his absence.

What can’t be forgotten was his role in the war where he actually flew on combat missions over occupied France as well as Germany. He filmed everything during his five flights which resulted in the memorable release, The Memphis Belle: A Story of a Flying Fortress (1944).

In addition, Mr. Wyler returned to Hollywood at the end of the war to release the classic The Best Years of Our Lives (1946) which won him another Oscar. It reflected the war’s toll on American soldiers, and helped you to understand why he was able to also direct a dozen more movies, including Ben Hur (1959), which won him his third Academy Award.

Ironically, Mr. Harris focuses his book on the incredible reality that Frank Capra’s cherished post-war film, It’s a Wonderful Life (1946), was viewed as a disaster at the time. It was a box office failure, and reviewers dismissed it as a film representing an age that was no longer relevant. Isn’t it funny how nearly all of us watch it every year during the Christmas season?

“The French and Indian War” by Walter R. Borneman

Having majored in history in college, I have always been fascinated by the war that consumed North America a decade before the Revolution. However, my purpose in including Mr. Borneman’s book is to point out its significance in two films that rank among my favorites. The first is Northwest Passage (1940), where Spencer Tracy plays Robert Rogers, who leads a group of rangers in a desperate attack to eliminate the Abenakis, a native American tribe that had been haunting upstate New York. I’ll never forget the emotionally crushing closing scene where Tracy says goodbye to his college educated friend (Robert Young) as he led a new group of rangers back into the wilderness, “See you at sundown, Harvard.”

The book also pays great attention to the massacre that followed the British surrender of Ft. William Henry Harrison in March, 1757. While the French allowed the British to surrender with honors, they were soon besieged by French Native American allies who were seeking a pound of flesh. That was the centerpiece of Daniel Day-Lewis’s great film The Last of the Mohicans (1992), and Hawkeye’s accomplished adversary, Magua (Wes Studi), became one of the most terrifying villains to appear on the silver screen.

← Clouds of Sils Maria
Going Clear: Scientology and the Prison of Belief →