While the Hotel doesn’t quite dance in The Royal Tenenbaums’ league, you can’t expect Wes Anderson to repeat a work of genius. It’s close and that’s good enough for me. 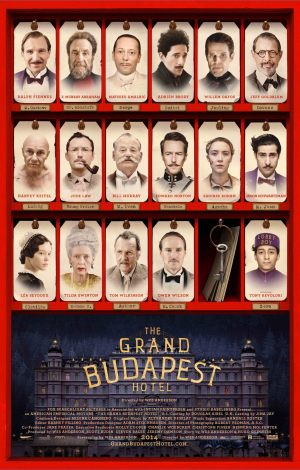 Director Wes Anderson’s The Grand Budapest Hotel is not a spectacular movie, but it is spectacularly entertaining. Forgive me if that appears to be a contradiction in terms, but I feel that Mr. Anderson suffers from the same malaise as the Coen Brothers. These guys are consistently praised by most critics, even though moviegoers found the Coen’s Inside Llewyn Davis to be lackluster at best.

So let me simply say that while The Grand Budapest Hotel has plot shortcomings, you really don’t care. There is not a single character who you won’t embrace, and there follows frequent moments of colossal enjoyment.

The film begins in 1968, where the struggling Grand Budapest Hotel’s mysterious owner is telling a poignant history taking everyone back to 1932. F. Murray Abraham captures your heart as he tells his story to a writer (Jude Law), documenting his rise from a lowly lobby boy to the man in charge.

What unfolds is a wondrous saga relating to M. Gustave, an eccentric concierge, and his relationship to Zero Moustafa, a young lobby boy. Ralph Fiennes is a gift from the cinematic gods as Mr. Gustave, a man dedicated to running the hotel as he seduces wealthy widows who patronize this exotic establishment. He demands much of everyone, which includes the requirement that all of his aging love interests have blonde hair.

Gustave’s life unravels when he is bequeathed a priceless painting when his most recent darling, played by an unrecognizable Tilda Swinton, suddenly dies and remembers him in her Will. Forced to run when Ms. Swinton’s heirs savagely turn on him, his adventures, which include a time in prison, are too priceless to describe.

The charm of this cinematic treat flows from Gustave’s adventures with his lobby boy. Gustave treats the young lad as a member of his family, and there follows some sensationally comic moments. Wait ‘til you hear Gustave address armed soldiers, who are about to take Zero into custody, with the immortal admonition, “Take your hands off my Lobby Boy!”;

The stellar cast includes small roles by Adrian Brody, Willem Defoe, Jeff Goldblum, Harvey Kietel, Edward Norton and Tom Wilkenson. Even during the film’s most serious moments, all of them are sublimely ridiculous at every turn.

I should also mention the moving performance by Saoirse Ronan, playing an important role as our lobby boy’s love interest. Bearing a large tattoo on her right cheek, she simply wants to find a way where they can escape the authorities and live peacefully. Ms. Ronan reminds you of her immense talent as seen in The Way Back (2010) and the extraordinary Hannah (2011) .

While Mr. Anderson’s prior films such as The Life Aquatic with Steve Zissou (2004) and The Darjeeling Limited (2007) were disappointments, The Royal Tenenbaums (2001) is one of the great films of our time. Furthermore, Fantastic Mr. Fox (2009) and Moonrise Kingdom (2012) come very close to that high standard.

All of his principal characters are flawed human beings, which makes them identifiably normal. Dripping with crazy idiosyncrasies that they try to use to their advantage, you end up rooting for them whether they succeed or fail.

The film is not just fun and games, as there are moments that will leave you a bit wistful. See if you leave the theater with a smile on your face and a twinkle in your eye.