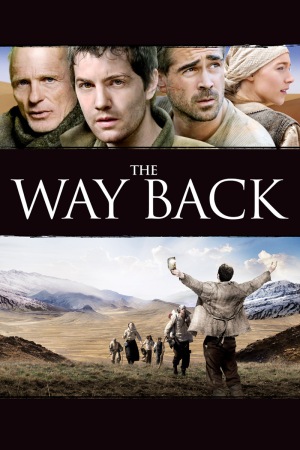 The Way Back is an old-fashioned, highly entertaining historical drama that Hollywood has all but forgotten how to make. Based on a true story, it follows seven eclectic inmates of a Russian prisoner of war camp located in Siberia when they escape during the early years of World War II. The camera then becomes one of their companions on their epic journey as they trek over 4,000 miles to eventual freedom in India, in the process crossing such formidable barriers as the Mongolian Desert and the Himalayan Mountains.

For you history buffs, you may recall several extraordinary movies set in German POW camps in WWII, most notably Stalag 17 (1953), the unsurpassable The Great Escape (1963) and King Rat (1965). Without question, those three movies were powerful emotional dramas filled with great performances, and The Way Back shares their basic premise.

However, the fundamental difference that makes The Way Back unique is that while the other three above referred to films have a homogenous prison population filled only with allied soldiers, the prisoner of war camp in Siberia contained an amalgam of Polish soldiers, common Russian criminals and even an American expatriate who foolishly moved to Russia during the depression. Several languages are spoken in this brutal sub-arctic prison, and it keeps the inmates from easily forming a common bond.

For example, the underrated British actor Jim Sturgess plays a young Polish soldier, a recent arrival in the camp. When he offers to give his meager food ration to an elderly inmate who is obviously on the verge of starvation, Ed Harris, playing the American expatriate, stops him, warning him that “kindness can kill you here.”

And that is not the only thing that can kill you in this remote, desolate penitentiary. Not only is the environment as foreboding as it is brutally cold, but some ruthless inmates who are little more than soulless thugs will slit your throat for little or no reason. Colin Farrell, continuing his penchant for portraying iconic characters, plays one of these ruffians, and the film is all the better for it.

Facing death at hard labor or an escape that seems doomed to failure, Harris’ character, known only as “Mr. Smith,” laconically speaks for all when he says, “Look, if we don’t survive then at least we will die free men.” Seven of them subsequently make a break, among them Sturgess, Harris and Farrell. What follows is a stunning quest as our collective group of misfits are eventually forced to bond in order to survive.

Director Peter Weir always has had the ability to bring to the screen historical dramas involving complex human relationships. Think of one of his earliest movies, Gallipoli (1982), in which he was able to show the brutal, senseless carnage of war through the eyes of two idealistic Australian soldiers in the doomed battle of the film’s title in World War I. This is a movie worth hunting down, particularly because you will be able to discover what a great actor Mel Gibson was as a young man, long before he eventually lost his mind and became the rabid racist that now inhabits his body.

Mr. Weir also directed Harrison Ford in the memorable Witness (1986), a film where Mr. Ford’s Philadelphia homicide detective was imbedded on an Amish farm in order to protect a young eyewitness to a murder. The juxtaposition between the peaceful, agrarian Amish and the violent outside world has seldom been equaled.

At its heart, The Way Back is a survival tale against immense odds. Our small band of brothers daily faces capture even if they can keep from either freezing or starving to death, not to mention dying of thirst. In much the same way that the classic film The Naked Prey (1966) showed Cornel Wilde running literally for his life across the central plains of Africa pursued by native tribesmen intent on killing him, The Way Back is a viscerally powerful film of seven strangers refusing to give up on themselves or each other.

Mr. Sturgess is an actor of great promise as he displayed in Julie Taymor’s Across the Universe (2007), where he played a star-crossed lover named Jude to Evan Rachel Wood’s Lucy, a musical told exclusively through the music of the Beatles. Mr. Harris is one of the most serviceable as well as underrated actors working today, and as for recent examples you should take a look at his stoic marshal in the western Appaloosa (2008) as well as his facially scarred, ruthless gunman in A History of Violence (2005).

Additionally, it is impossible to codify the talents of Mr. Farrell, as he simply refuses to be pigeonholed as an actor. Without pretending to list all of his accomplishments, all you really need to know about his talents is to consider his country music singer in last year’s brilliant Crazy Heart as well as his conflicted hit-man in In Bruges (2008). Mr. Farrell is one of those actors who seems to always be pushing the outside of the artistic envelope, and you have to profoundly admire him for it.

Finally, I would be remiss if I didn’t note the splendid performance of Saoirse Ronan, here playing a young Polish girl who joins our band of escapees on their heroic journey. Like her young accuser that was central to the success of Atonement (2007), Ms. Ronan is again seen here as a young woman who is capable of holding her own against the boys. Their platonic affection for her along the way is both genuine and heartbreaking, and it is one of the many reasons that makes this film so splendid.

Along with the breathtaking cinematography that reminded me of many of the extraordinary shots in the Lord of the Rings trilogy, The Way Back is as visually stunning as it is emotionally satisfying. This is a rousing, first-rate adventure, and you fans of the cinema will do yourself a profound disservice if you miss it.