I couldn’t help but remember when I fell hopelessly in love with Hayley Mills after seeing Pollyanna in 1960! 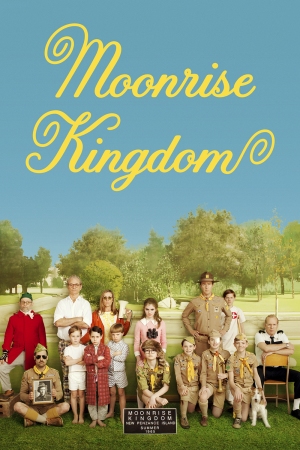 There simply is no other way to honestly describe Moonrise Kingdom. Simply put, if you loved The Royal Tenenbaums (2001), then this is a movie right up your alley.

Moonrise Kingdom is a tantalizing film that takes you down many unexpected roads. Mercifully, Director Wes Anderson has rediscovered the magic that he so clearly displayed in the above-mentioned Tenenbaums, and here he again spins a delightful story where young, teenage children are smarter than any of their supervising adults.

The movie centers on a young Scout Troop on the East coast run by Scoutmaster Ward, played by Edward Norton in a role where he is as decent as he is confused. Unfortunately for him, he has lost the complete interest of a scout named Sam (Jared Gilman) who chooses to flee so that he can be with Suzy (Kara Hayward), the love of his life. Their decision to flee down the coast throws every adult into unspeakable chaos, and it is genuinely far funnier than it is horrifying.

Bruce Willis steals the film playing Captain Sharp, a well-meaning police officer in charge of the investigation. Given the fact that he is having a rather cheap affair with Laura Bishop, played by the terminally confused Frances McDormand, he has a difficult time keeping things in focus.

To make matters worse, our two idiot lovebirds are constantly dodging the growing suspicion of Ms. McDormand’s husband, Walt, who is left trying to save his foolish wife and missing daughter. Given the fact that Walt is played in another madcap performance by the great Bill Murray, the hunt for our kid sis not made easy.

Adding further intrigue to the film are the contributions of a number of wonderful actors. To begin with Bob Balaban is his normal deadpan self, here playing a narrator who adds to the chaos by predicting the expected arrival of a hurricane. Harvey Keitel plays Commander Pierce, a Boy Scout leader who would not have missed a beat if he had been serving as a member of the German Gestapo in the 1930’s. Finally, Tilda Swinton plays a diabolically harsh Social Services Director who would have done just fine working for Governor Daniels in our State Department of Social Services as they found continual ways to save millions of dollars while leaving hundreds of poor people suffering.

More to the point, we have two young lovers seeking an adventure that will include their first kiss. They aren’t mean spirited, but simply kind and considerate. They challenge the loyalty of the rest of the scout group, who must decide whether to help them or simply let them flee to their own anticipated destruction. At that, the single most moving moment of this remarkable film is when Bruce Willis rediscovers his damaged soul when he finds that young Sam is destined for an asylum if someone doesn’t adopt him.

Again, this is an incredibly enjoyable film, and has a lot of the crazy energy that Mr. Anderson brought to his diabolically clever animated film Fantastic Mr. Fox (2009). Put another way, I thought that Mr. Anderson lost his focus with such disappointing films as The Darjeeling Limited (2007) and the last half of The Life Aquatic with Steve Zissou (2004). But make no mistake, as he is clearly once again back on his artistic game, and this is a film you are certain to love.

← Snow White and the Huntsman
Brave →