This is an engaging, slow-moving historical film that you are better off seeing on Netflix. If and when it becomes too repetitive, there is always an easy excuse to find something else to do. 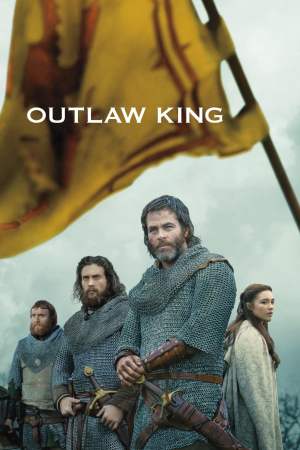 When Mel Gibson was still likeable, he directed and starred in Braveheart (1995), a prequal to Outlaw King. Gibson played William Wallace in the late 13th century, a rebel who leads a revolt against King Edward I of England to try and establish a free Scotland. While Wallace was eventually captured and executed, his death no longer seems to be a complete tragedy given that Mr. Gibson has morphed into a supremely unlikeable character both on and off the screen.

With Outlaw King, Chris Pine plays Robert the Bruce, a follower of Wallace declared King of Scotland who picks up the revolutionary mantle and breathes life into the Scottish rebellion. Though I personally love these historical dramas, the film itself is largely a one-trick pony where one battle leads to the next one as you watch good guys get brutally slaughtered.

The principle reason to see this film is the performance of Chris Pine as Robert the Bruce. Many of my female friends make no secret concerning their attraction to Mr. Pine, and I should note that he follows up role in Wonder Woman where he emerged naked from a cave bath with a scene where he is bathing sans clothing in a Scottish river. I have no doubt that some of my caustic female companions will declare that this is enough reason to see the Braveheart sequel regardless of its other shortcomings! (I’m speaking of the film, and not Mr. Pine’s anatomy!)

More to the point, Mr. Pine has proven himself to be a tremendous actor as reflected by his role as Captain Kirk in Star Trek (2009), his contributions to the above-referred Wonder Woman (2017) and his fantastic performance in Hell or High Water (2016). Though his role in this film repeatedly adds needed energy, I was left wishing that the audience wasn’t finding itself as emotionally beaten to death as many of Pine’s colleagues.

Regardless, this film follows Mr. Pine as he leads a small group of followers as they challenge the authority of Edward I (Stephen Dillane) of England. While the king is a loathsome character, he is exceeded in every respect by a son who lacks any likeable character traits. Billy Howel plays this heir to the English throne who is determined to butcher and kill any residents of Scotland who try to assist the rebellion of their new king.

While there are a few other meaningful performances, let me simply point out the roles played by Florence Pugh and Aaron Taylor-Johnson. Ms. Pugh plays Elizabeth, a woman selected to be the wife of Robert. She quickly exceeds her beauty as a woman determined to stand by her husband and help raise his young daughter from a prior marriage that ended with the death of his wife.

Mr. Taylor-Johnson plays James Douglas, a renegade who fights incredible odds to help free Scotland from English rule. Mr. Taylor-Johnson is a talented actor, and you should take the time to see his role as Quicksilver in Avengers: Age of Ultron (2015) as well as his role in Nocturnal Animals (2016), where he commands your attention as a rogue that you will not soon forget.

Let me end by saying that you are not likely to see any film as here where the heroes are constantly covered in blood and muddy filth. The significant battle scenes are violently brutal beyond words and they become tough to watch when you are left speculating how many horses died in combat. I stuck around to the end of the credits to be reassured that none of them were injured while the movie was being filmed, but I was left in doubt when no reference was made on an issue that was important to me. I suggest that you animal lovers make an inquiry before taking the time to hunt this movie down.

Let me close with a compliment concerning the film’s music, particularly the great Scottish songs being sung during the closing credits. I was waiting to see some reference to that music, but nothing appeared. I am at a loss on why director David Mackenzie didn’t take the time to acknowledge those songs.