I admit that I love Eva Green, and I don’t care if she is a heroine or villainess. 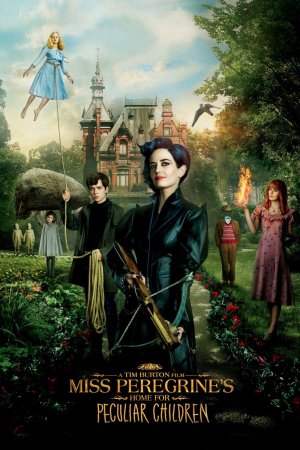 Let me confess that I really liked legendary director Tim Burton’s Miss Peregrine’s Home for Peculiar Children. While it has sporadic weaknesses, it is a reflection of Mr. Burton’s ability as a creative artist to push the outside of the cinematic envelope.

Initially taking place in the United States in modern times, Jake (Asa Butterfield), a 16-year old boy, finds his beloved grandfather Abe (Terrence Stamp) dead in a forest. What is worse, his grandfather is missing his eyes.

Thereafter, he travels to a small island off the coast of England with his father Frank (Chris O’Dowd). He is looking for a rambling school house previously occupied by Miss Peregrine’s School for Peculiar Children, and discovers nothing but old ruins. Journeying through the ruins by himself, Jake makes a startling discovery that shapes the rest of the film.

Without saying more, he is introduced to Miss Peregrine (Eva Green), and learns that the school was destroyed by a German bomb dropped in 1943. Miss Peregrine is able to go through a time warp where she and all of her children are able to live up to the moment the bomber arrived. That part of the story is fascinating, and it leads to a confrontation that threatens everyone’s lives.

It soon becomes apparent that a deranged group of humans, led by Barron (Samuel L. Jackson) can only live off the eyes of peculiar children, and the movie becomes a sinister battle between children and their cannibalistic pursuers. The story is helped by some small performances from the talented Allison Janney, Jake’s psychiatrist, and the wonderful Judi Dench, a woman who tries to help the children.

Though the movie becomes a bit disjointed, you’ll love the Peculiar Children. They all have various idiosyncrasies, and who wouldn’t be fascinated with kids ranging from a little girl with a shark-type mouth in the back of her head and a small boy able to hurl bees from his mouth.

While the film isn’t helped by the sad fact that Mr. O’Dowd (think of his marvelous performances in St. Vincent (2014), The Sapphires (2013) and Bridesmaids (2011)) is not given enough attention, just remember the splendid performances coming from Ms. Green, Mr. Butterfield and Mr. Jackson. Ms. Green is an underrated actress, and no performer working today does a better job at playing hard-nosed women with an attitude. For example, think of her roles in Sin City: A Dame to Kill For (2014), 300: Rise of an Empire (2014) and Dark Shadows (2012). Mr. Butterfield, who is not yet 20 years old, has already demonstrated exceptional talent in both A Brilliant Young Mind (2015) and The Boy in the Striped Pajamas (2008). As for Mr. Jackson, he commands your attention as an eyeball eating villain in the same manner displayed in this year’s The Legend of Tarzan and last year’s The Hateful Eight and Chi-Raq.

While I saw this movie by myself, make sure you drag a child with you over the age of ten. You are likely to have fun, and they are likely to love the entire film.

← Queen of Katwe
The Birth of a Nation →