Do yourself a favor and see this brilliant little movie. 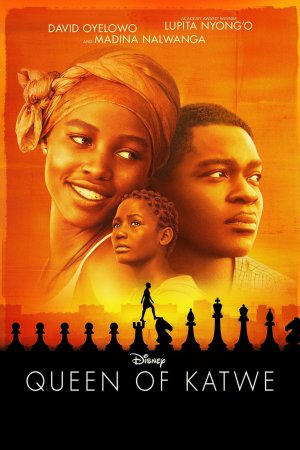 You will never see a more inspiring film than Director Mira Nair’s Queen of Katwe. Everything about this film is memorable, and the fact that it is based on a true story will warm your heart from beginning to end.

Taking place in Uganda from 2007 to 2012, it tells the story of Phiona Mutesi, a young girl who rises from destitution in a poor Ugandan village to achieve national fame as a chess prodigy. Madina Nalwanga gives a startlingly moving performance as Phiona, a penniless young soul selling ears of corn on the street to help support her single mother and other siblings.

However, the movie is dominated by David Oyelowo and Lupita Nyong’o, embodying two characters that define the human condition. Mr. Oyelowo plays Robert Katende, a young married father who takes a part-time job as a teacher at a small missionary school while trying to pursue a hopeful career as an engineer. As Mr. Katende, Oyelowo inspires Phiona to learn the game of chess after her curiosity causes here to stumble into his classroom. Oyelowo reminds me of a young Sidney Poitier, and if you have any doubt, hunt down his performance as Dr. Martin Luther King in Selma (2015).

As for Ms. Nyong’o, she has already won an Oscar for her searing performance in 12 Years a Slave (2013). In Queen, she plays a hard-nosed mother who fights to raise her children in a dignified manner as she scrapes together limited funds while trying to keep her children from starving. Despite the fact that she has been abandoned by her husband, she aggressively approaches life to try to make sure that her children live with a bit of dignity.

Before she became a chess champion and a national hero, Phiona began her schooling under Katende’s guidance as a young girl who was ridiculed for her clothing and body odor. But there was no quit in this child, and she literally becomes a human version of Secretariat as she glows under the umbrella of love and opportunity to go where no Ugandan woman had gone before.

There isn’t time to single out all of the other supporting actors in this cinematic treasure, but they all play important roles as you watch Phiona’s participation in various competitions. As Hollywood continues to wrestle with diversity problems brought out in last year’s Oscar selections, this film is a perfect vehicle for them to find redemption.

As the film ends and you try to dry away your tears, the cast individually appears on screen with the actual characters they played in the film. There wasn’t a dry eye in the entire theater.