Divergent was better than expected while Insurgent is worse than anticipated. 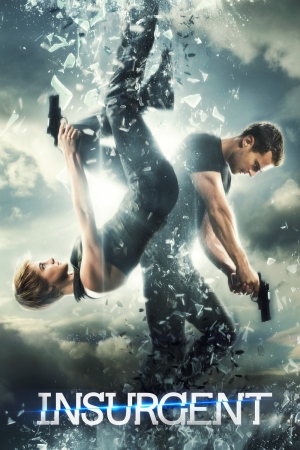 Let me begin by applauding the fact that women are playing a much larger role in action movies than they have ever done before in Hollywood history.  While Sigourney Weaver broke this gender barrier in the original Alien (1979), it was a long dry spell before seeing Scarlett Johansson emerge in The Avenger film sequels; Evangeline Lilly in The Hobbit trilogy; Melissa McCarthy and Sandra Bullock in The Heat (2013); Zoe Saldana in both Guardians of the Galaxy and The Fast and Furious films, and Jennifer Lawrence in the memorable Hunger Games films.

Though Insurgent is a rather pedestrian film that eventually runs out of gas, it survives because of the contributions made by Shailene Woodley, Kate Winslet and Naomi Watts.  Their collective talent forces you to pay attention even when that requires a considerable effort.

Unfortunately, Insurgent has some interesting special effects that mask the reality that it is a rather dull film.  Ms. Woodley reappears as Tris, the young woman challenging an autocratic government run by Ms. Winslet, and she displays the skill shown in such prior films as The Spectacular Now (2013) and The Fault in Our Stars (2014).

Nonetheless, even Ms. Woodley can’t salvage a film that has her doing little more than run from one catastrophe to another while taking time to moon over her hulking boyfriend Four, played by Theo James.  It is impossible to say if Mr. James has any acting talent as this film evolves sadly into an artificial teenage love story that hopes to attract teenage girls left in a sexual panic after Fifty Shades of Grey disappeared from the screen. This could be the first romantic love story that forgot to depict romantic love.

Ms. Winslet does what she can as she plays a villain who is attired as if she will be sitting in the front row at a Parisian fashion show.  Ms. Watts makes an almost unrecognizable entry as Four’s mother, and you are left wondering if she will develop into a heroine or villain in the upcoming finale.

Ironically, the one person who has to feel miserable about this cinematic disappointment is Miles Teller.  Depending on the winds of fortune, he vacillates between the guy intending on killing Tris to someone who intends on saving her life, and you suspect that he has more apologies to make than Israeli Prime Minister Netanyahu following his scandalous remarks during his run for reelection.

Just forget Teller’s role here and remember him for his superlative performance in the Oscar nominated Whiplash.  The cinema world will be a better place, and that is the one positive thing I can say about this film.

← What We Do in the Shadows
It Follows →