What We Do in the Shadows

While Simon Pegg’s Shaun of the Dead (2004) is a comic classic, this inspiring bit of cinematic lunacy comes in a close second. 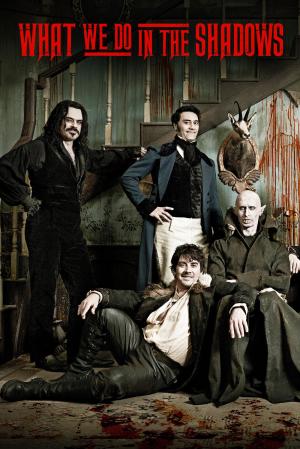 Tell me that you don’t want to see an admittedly fake documentary about four vampires living as roommates in modern-day Wellington, New Zealand.  What We Do in the Shadows is a comic absurdity that left most of the audience repeatedly laughing.  It is deranged beyond description, and I can guarantee that you will find yourself gagging with delight despite occasionally hating yourself for doing so.

The four vampires are named Viago, Vladislave, Deacon, and Petyr. Their ages range from 183 (Deacon) to 8000 (Petyr).  With the exception of Petyr, who looks like a recreation of the original Nosferatu, the other three look human although they lack any concept of acceptable social behavior.  Wait until you see how they dress in public and you will understand.

In any event, since they have been invited to a masquerade ball, the plot revolves around their decision to hire a camera man to film their activities over a period of one week.  They give the camera man a crucifix to wear to assure him that he will not be eaten.  On the other hand, a vampire needs to find blood somewhere, so other New Zealand residents are fair game.

Deacon has a human servant called Jackie, and she cleans the house while providing guests to serve as a tasty dinner meal.  One of the victims, Nick, tries to flee, but inadvertently is also turned into a vampire.  However, he doesn’t really know how to be a responsible vampire, and he proceeds to identify himself without realizing he is risking a backlash from vampire hunters.  Mayhem soon follows.

I saw the film with a friend who accurately described it as resembling a group of stoned college fraternity members filming a mock story about vampires.  While he wasn’t far wrong, the exchange between our four vampires is so excruciatingly funny at times that it is quite easy to ignore the film’s silliness.

At the much-anticipated masquerade party, Vladislav meets the hated enemy of his long existence that he calls “The Beast”.  You really begin to embrace the madness of this film when you realize that “The Beast” is Vladislav’s ex-girlfriend from a failed relationship that ended centuries ago.  Needless to say, the passage of time doesn’t heal all wounds, and you quickly learn that applies to vampires.

As they flee the masquerade and try to head home, werewolves enter the picture and I will leave that encounter to your imagination.  Let me just warn you that if you see this film with company, one of you will likely laugh yourself sick while the other responds “What in the hell did you take me to this thing for!”

So let my endorsement serve as a warning.

One thought on “What We Do in the Shadows”