Hector and the Search for Happiness

As you get older, how would you define happiness? Is it being surrounded by family and friends or having the pleasure of your own company as discovered by Mia Wasikowska in this year’s Tracks? 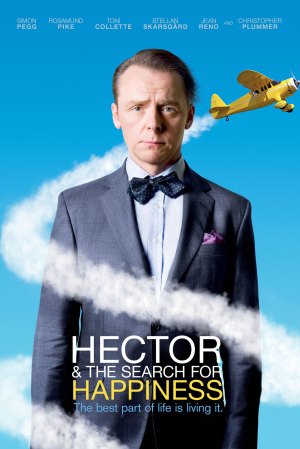 Every now and then an all but ignored movie comes along that entertains more on an intellectual level rather than a physical one. Such is the case with Director Peter Chelsom’s Hector and the Search for Happiness.

Hector, played by the always funny Simon Pegg, is a psychiatrist who is forced to confront the very issue tormenting most of his patients. In other words, how can he possibly aid troubled souls who are simply seeking a way to find a bit of happiness in life when he is not sure he has found it himself.

While he loves his girlfriend, Clara, she does nearly everything for him. He never chooses his own food, and she even picks out and ties the tie chosen to be worn to the office. Should they get married, should they have children, and why is he left stumbling for answers?

In the hope of finding insight, Hector decides to go around the globe alone where he searches for a definition of happiness. It begins in the gorgeous city of Shanghai, China, where Hector is taken out on a fun ride through the city’s provocative night life with the help of a very rich man (Stellan Skarsgård) who he met on the plane. Skarsgård’s wealth does not equate to happiness, and things get a bit bumpy when a beautiful young woman who seeks Hector out in a nightclub turns out to be a prostitute. No happiness there either.

After a trip on foot to the mountains where he spends some time at a monastery, Mr. Pegg starts to get a feel for what delights people who have very little. Unfortunately, his next stop is to fly to Africa where he can visit an old college friend, and his hope to find happiness nearly ends in death.

Arriving after a harrowing flight, he discovers that his friend is working as a doctor at various refugee sites where he tries to provide comfort to beleaguered citizens. Pegg starts to help, and a golden moment of the film is when he is invited home by a local family where they all celebrate over their cherished potato soup.

However, Pegg’s journey turns on its head when he is kidnaped and brutally tortured by local militants. Close to death, he is saved because of an earlier accidental friendship formed with Diago Baresco, as always played with style by Jean Reno. Mr. Baresco was a powerful local drug dealer, and Mr. Pegg soon finds himself dumped alone in the jungle where he can continue his pursuit.

Using good sense, he flies to Los Angeles to visit an old, but not forgotten, love played by the magnificent Toni Collette. Still wrestling with doubt over whether he passed on happiness when their relationship ended years ago, he discovers that she is married, pregnant, and has two children. She is a psychologist with a great deal of common sense, and passionately confronts Pegg to get his act together.

It was at this time that Christopher Plummer makes a very small but meaningful appearance as a psychologist who has developed a technique to read emotions. It was during a session with Mr. Plummer that Pegg finally realized that happiness is to be found by returning to his job and the beautiful professional woman who still waits for him.

It’s really tough to recommend this movie as it has its ups and downs. However, Pegg keeps an interesting journal on his voyage, and he is able to record observations that fit his quest. It becomes quite intriguing as you see his various entries appear on the screen.

As for Ms. Pike, it is worth comparing her extraordinary talent to the diabolical woman she is presently playing in Gone Girl. She is as outgoing and vivacious here as she was brutally hateful in the latter film.

While this is certainly not Mr. Pegg’s most memorable film, it is worth remembering the contributions he has brought to the screen with Shaun of the Dead (2004); Hot Fuzz (2007); his role as Scotty in the new Star Trek series that began in 2009 and his wonderful contribution to last year’s The World’s End. While I have made clear my unfortunate feelings about Ben Affleck’s talent as an actor, if Mr. Pegg is in a movie, I can’t miss it.