Recommended, particularly if in the company of an adolescent male 15 years or younger. 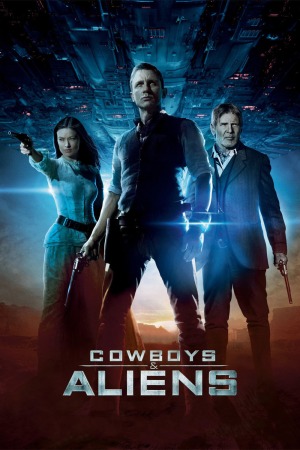 If you’ve seen the previews for Cowboys and Aliens, you undoubtedly fall into one of two categories. You are either mildly intrigued or you have summarily dismissed it as ridiculous hokum.

I was in the former category, as you might suspect, but I took along the 15-year old grandson of some good friends as an insurance policy. Quite frankly, I had an old-fashioned good time, finding the film’s inherently nonsensical premise to be its strength. And my young compatriot found it to be “pretty good”, further stating that he enjoyed it as much as Captain America. (On the other hand, let me repeat that he is 15 years old!)

For you skeptics in the audience, and I’m sure that you are in good company, let me just say that Cowboys and Aliens is a cross between Howard Hawk’s legendary western Red River (1948), which starred John Wayne and Montgomery Clift, and Ridley Scott’s epic science fiction film Aliens (1986), which established Sigourney Weaver as the cinemas’ first female kick-ass action star.

Obviously, Cowboys and Aliens is an amalgam of two movie genres that are seemingly inconsistent on their face. On the other hand, given the fact that many of you have bought into the cinematic premise that aliens periodically visit our planet, frequently with a bad attitude, then what is so absurd about suggesting that they might have done so as early as the 19th century?

After all, the whole premise for the last Transformers movie was that aliens had crashed on the moon centuries ago. And of all the criticisms leveled at that wildly popular excessive film, I don’t remember any critic saying, “Come on, that premise is just too farfetched to be believed.”

While I am certainly not denying that Cowboys feels severely forced, not to mention silly, at times, it somehow coalesces into an interesting summer action movie. First and foremost, its appeal is due in large part to the incredible acting talents of Daniel Craig. Here, he plays Jake Lonergan, a man found lying in the desert with a mysterious large metallic object attached to his left wrist. Jake, having not only forgotten his name but his entire identity, literally doesn’t know who he is, a mystery that he seeks to unravel as subsequent events swirl around him.

I find Mr. Craig to be an immensely intriguing actor as demonstrated by a series of wonderful performances ranging from a bisexual killer opposite Toby Jones’s Truman Capote in the underrated Infamous (2005); a doomed cocaine dealer who desires nothing other than an early retirement in the immensely entertaining Layer Cake (2004), not to mention the fact that he singlehandedly revitalized the all but artistically dead James Bond movies with his inventive and compelling interpretation of the suave 007.

In Cowboys, Jake stumbles into the town of Absolution, a miserable little outpost on the frontier of the Old West. The townsfolk are a collection of the same lowlifes and decent folks that you have seen in such westerns as Clint Eastwood’s The Outlaw Josey Wales (1976), Pale Rider (1985), and the Oscar-winning The Unforgiven (1992). A profound weakness in the film is that most of them are one-dimensional characterizations, particularly the put-upon Sheriff played by Keith Carradine, the clueless saloon owner named “Doc” played by an underused Sam Rockwell and an autocratic cattle baron and his psychotic son, played respectfully by the legendary Harrison Ford and the miscast Paul Dano.

As we have seen from Mr. Dano in such glorious performances as the mute son in the delightful Little Miss Sunshine (2006) and his religious fanatic who served as the antagonist for Daniel Day-Lewis in the latter’s Oscar winning performance in There Will Be Blood (2007), Mr. Dano is one of those actors capable of breathing life into marginal, edgy characters. When you include his small role as the LSD swilling hippy with a Volkswagen bus in Ang Lee’s overlooked Taking Woodstock (2009), it is all the more lamentable that his demented character in Cowboys left him with little to work with.

As for Harrison Ford, it is now clear that this actor, who has appeared in some of the truly enjoyable films of the past 25 years, has been reduced to roles where he is little more than a one-dimensional crotchety old man. Although he mercifully becomes much more convincing as this film gains momentum in its last half, he is really little more than the crusty bastard that he played in Extraordinary Measures (2010) and the lamentable Morning Glory (2010). It makes you wonder whether a younger Harrison Ford really had acting talent or just a talent for appearing in tremendous films.

Regardless, the plot of Cowboys and Aliens involves aliens who are mysteriously snaring humans through a rope-like device from their space ships and taking them away to parts unknown. While I am tempted to use the analogy that our protagonists are forced to join forces much like Congress just did in reaching a settlement on the debt ceiling, I can’t help but think that our country would be much better off if Mitch McConnell, John Boehner and their Tea Party sycophants were actually swept away by aliens to parts unknown. Aw, wishful thinking!

Begging your indulgence for my momentary flight of fantasy, I should also mention that our gang of reluctant heroes are joined by the mysterious and beautiful Ella Swenson, a bar tramp who is more than she seems. Played by Olivia Wilde, last seen in the underrated sequel Tron: Legacy (2010), Ms. Wilde’s performance along with Mr. Craig’s contributes vitally to making Cowboys and Aliens a fun ride.

In the end, I expect that this film will be declared a summer disappointment in much the same way that The Golden Compass (2007) was at the time. Both films deal with dark, troubling themes, and in the end are far too somber for America’s summer crowd. Yet it is that very pathos that raises their drama above the superficial absurdity of most other summer films, and you could do far worse than spending two hours with this goofy little movie treat. If nothing else, console yourself with the thought that the cinematography is at times breathtaking.