A movie to keep in mind when confined to home this winter with a high fever, cursing yourself for failing to get a flu shot. 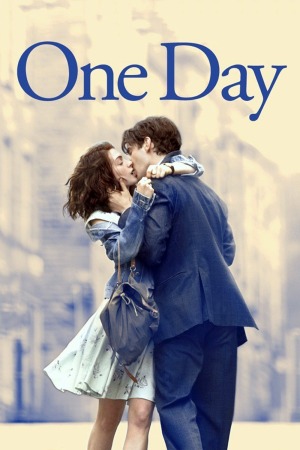 One Day is a messy, episodic tale about love and missed chances. It’s inherent imperfection lies with the fact that its basic story is simply too true to life, namely just how frequently would-be lovers are too clueless to know when to hold ‘em and when to fold ‘em.

Let me say from the outset that those of you who have an inherent dislike for either Anne Hathaway or Jim Sturgess, much in the same way that I view Kate Hudson and Ashton Kutcher with inherent artistic contempt, should stay as far away from this film as possible. The basic reason is that much like the case with Emma Stone and Ryan Gosling in this year’s semi-likeable Crazy, Stupid, Love, One Day survives solely on the occasional chemistry generated between Hathaway and Sturgess. More of them later.

Here, we find them spending a platonic evening at her apartment following a drunken college graduation party, where they make a commitment to remain friends by staying in touch with each other every July 15th. In the process, the movie follows their lives and long distance relationship from that first moment together in 1988 to a defining moment 20 years later.

Though Ms. Hathaway’s English accent (the movie takes place in London) is occasionally strained, she is nonetheless initially appealing as a young woman clearly in love with Sturgess, but too insecure to act on her feelings. As we watch the years pass by, we also watch her slowly give in to life’s frustrations, all but abandoning her hope of a literary career in exchange for menial jobs and even more menial personal relationships.

While Sturgess is far more the flamboyant of the two, he is equally lost in his own way. Though becoming a minor celebrity while hosting a tacky TV reality show, his life becomes all glitter and little substance. Sex, drugs and rock and roll is one great rocket ride until you run out of fuel.

The real problem with this movie is that you gradually lose interest in our two star-crossed lovers as they age. Sturgess evolves into little more than self-centered alcoholic who turns to Hathaway when the consequences of his boorish life come crashing down on him. In the process, he is stuck in an unattractive straight jacket where you see none of the charm he so wonderfully exhibited in the enchanting Across the Universe (2007).

While Hathaway is more likeable (she is Anne Hathaway after all) she becomes borderline pathetic as she settles for a dismal restaurant job and a cloying live-in boyfriend who fancies himself to be a standup comic despite the fact that he seems to totally lack a sense of humor. I must confess that I think that Hathaway gets shortchanged by many critics. She was wonderful as the suffering wife in Brokeback Mountain (2005) as well as the suffering secretary in The Devil Wears Prada (2006). She deserved her Oscar nomination as the drug addled Kym in Rachel Getting Married (2008), and was crucial to the enormous success of Tim Burton’s Alice in Wonderland (2010), where she played the White Queen. And while I recognize that I am in the minority, I found her utterly beguiling as the Parkinson’s afflicted Maggie Murdock opposite Jake Gyllenhaal in last year’s Love and Other Drugs.

On the other hand, though Hathaway here is cute and a bit bohemian, it is hard to really care, much less empathize, for a woman that really doesn’t care about herself. It is a fatal flaw that One Day cannot overcome.

As most of you movie fans know, Hollywood doesn’t do very well as a general rule with romantic films. They tend to be either corny or artificial, usually resulting in sappy films like The Notebook (2004) and anything starring Kate Hudson, Catherine Heigl or Ashton Kutcher. Usually, just the description “highly romantic” is an instant buzz kill.

And while One Day tries hard, it unfortunately represents the rule and not the exception. Certainly, some of the more remarkable romantic films in history have involved similar stories of star-crossed lovers. Just think of Gone With the Wind (1939); Casablanca (1942); Local Hero (1983); Starman (1984); and Shakespeare in Love (1998) to name a few. But our lovers here just aren’t convincing, and as a result don’t come close to dancing in the same arena as these legendary movies.

I know that I was supposed to approach the ending with a sense of tense anticipation. Will they or won’t they? But the truth is I was left feeling like Clark Gable in the above mentioned Gone With the Wind. “Frankly, my dear, I don’t give a damn.”