Director Chris Weitz’ A Better Life is an extraordinary film on multiple levels. As brilliantly acted as it is politically relevant to our times, it is a movie that forces the viewer to take a deep look into the contemporary American soul. 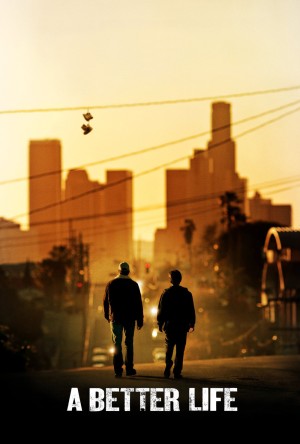 Demian Bichir is heartbreaking as Carlos Galindo, an undocumented Hispanic immigrant trying to live under our government’s radar screen as he labors to provide for his teenage son, Luis. He works from daybreak to sunset as a gardener at the homes of wealthy Los Angeles residents, and he scrimps and saves with the hope of providing his son with access to the American Dream, something that will always be beyond his personal reach.

What ensues is a struggle so personal and visceral that it will likely leave you sitting with tears running down your cheek. As Carlos struggles to better himself for the sake of his son, his son gradually grows estranged from a father that he doesn’t understand and increasingly resents. Forced to attend a public school dominated by drugs, dysfunction and gangs, he is drawn by the magnetic pull of destructive forces that his father is desperately trying to protect him from.

But while this story of a sincere, hardworking undocumented immigrant stands on its own as a searing drama, it reveals a glimpse into the underbelly of our society that should bring shame to us all. While nativistic state legislators like Indiana’s own Mike Delph intentionally use these millions of largely poor, hardworking immigrants as political pawns for their own cheap political goals, the undeniable consequence has been to leave these people at the mercy of forces beyond their control.

As we see with Carlos in A Better Life, his attempts to improve his lot by buying an old truck puts him on a collision course with law enforcement given the fact that he is unable to obtain a driver’s license. Can anyone imagine what it must be like for the Carloses of our society to risk arrest every day as they simply try to get back and forth to work? Has Mr. Delph, a self-promoting Nancy Grace version of a public servant, given this one moment of thought as he must watch the thousands of Hispanic immigrants work as day laborers in Hamilton County here in Indiana, his home county? How can he and his ilk be so woefully blind to the horror visited on these people daily simply for the price of trying to earn a living?

In addition, A Better Life exposes the heartbreaking consequences of our failed immigration policy in this country, particularly the fact that these immigrants are beyond the protection of the police. There is a poignant scene where Carlos is chasing a thief who has stolen his truck, only to encounter a police officer who is about to get in his squad car. Despite the fact that Carlos is in dire need of assistance, he must walk away from the officer and say nothing for reasons that are all too obvious.

The simple fact is that we should all contemplate the reality that millions of Hispanics are at the mercy of unscrupulous employers, thieves and crooked police officers. Since they can never complain to the authorities, they can be victimized at will with little or no consequences to their assailants. How can those who publicly posture about Christian values tolerate a policy where we wantonly allow the worst to be visited on the least among us?

Director Chris Weitz has brought us a movie about the plight of desperate immigrants that is even more powerful than the extraordinary The Visitor (2007), a movie that won Richard Jenkins an Oscar nomination for best actor. As he previously demonstrated in About a Boy (2002) and the very underrated The Golden Compass (2007), Mr. Weitz has an incredible feel for the human condition, particularly as it relates to the exploitation of children.

Given the fact that he was also the producer of A Single Man (2009), Nick and Nora’s Infinite Playlist (2008) and American Dreamz (2006), one would be well-advised to give him the benefit of the doubt when it comes to seeing any movie that bears his name.
Like it or not, we Americans can’t come close to pretending to be true to our core values and simultaneously tolerate a society where we treat over 10,000,000 people as the functional equivalent of indentured servants. Yes, we have eliminated slavery, but we now have a system where we relegate an entire class of people to second class citizenship. They are the “untouchables” of our society and we should be profoundly ashamed, something that I think will become increasingly clear as the years go by.