Along with A Better Life, which I recently reviewed, I dare say that you won’t find a more emotionally powerful film this year than Winter in Wartime.

Except for those of you with the incurable cinematic illness known as “acid reflux subtitle syndrome”, this sensational World War II drama will have you in its magnetic clutches from its opening sequences. 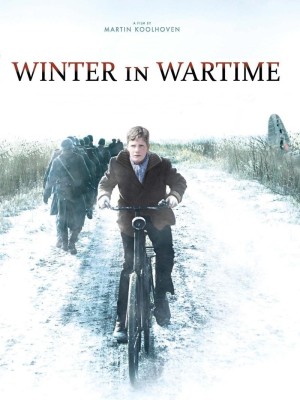 Set in Holland in January of 1945, the story follows a downed RAF pilot and the impact on a small Dutch village as they try to survive the boot-heel of Nazi occupation. In the process, Winter in Wartime deals with timeless themes of patriotism, family, survival and resistance.

At the heart of this fine film is a small family whose devoted father is the mayor of the occupied village. Played by Raymond Thiery, you see a stoic man swallowing his pride and cooperating with the Nazis in order to protect his town and the beloved family and friends who live there. Trying to help everyone survive while simultaneously not losing his dignity and self-respect, it is a nuanced, unforgettable performance.

Much like the above-referred-to A Better Life, central to this remarkable film’s dramatic impact is the gap that develops between the mayor and his 15- year old son. While the father has to play the role of a Nazi collaborator and accept public humiliation as the price for saving his community, all his son sees is a craven submission to hated German occupiers. When the young boy discovers all too late just how heroic his father is, you are left with a scene of selfless sacrifice that will likely leave you gasping in admiration as you fight back tears.

I have always been a fan of World War II movies, and I still find them relevant to this day. In one sense I am reminded of the lunatic Army colonel in the classic comedy Harold and Maude (1971), where he told young Harold that the reason the United States hasn’t had a truly popular war since WWII is that we mistakenly made friends with the “Jerries.” He then offered the caustic, idiotic opinion that we can finally get back to a good shooting war if we simply get the Germans back on the other side where they belong so that “we have an enemy worth killing!” What a classic scene in a classic movie!

On a more serious note, what is found in certain World War II movies are qualities largely missing today, namely those of selfless patriotism, devotion to one’s country, and a willingness to give up your life for your fellow man. In many ways you will find no more poignant films revolving around those themes than They Were Expendable (1945); The Great Escape (1963) and Clint Eastwood’s dual masterpieces, Flags of Our Fathers and Letters from Iwo Jima (2006).

World War II movies like Winter in Wartime are extraordinarily relevant for other reasons. One of them is a reminder of why torture was considered completely incompatible with any definition of contemporary civilized behavior between nations. For those of you who may defend what we call “enhanced interrogation techniques” by our country at Guantanamo Bay and other locations should recall just how condemnable those tactics were when used by the Nazis against Allied soldiers, not to mention civilians, in World War II. Isn’t it tragic how soon we forget? Isn’t it tragic how we try to legitimize torture by using a different name and thereby inevitably justify its use by our adversaries?

In addition, what we also see in these films about the colossal struggled that took place in the 1940’s is the ghastly cost of war on local inhabitants. More than a million Vietnam civilians died in the tragedy known as the Vietnam War, many from the use of chemicals like “Agent Orange.” But since they weren’t westerners, how many Americans cared?

The same may be said about the wars we have conducted in both Iraq and Afghanistan. As bad as Saddam was, close to 20% of the inhabitants of Iraq became refugees as a result of our ill-considered invasion. That would equate to 60,000,000 Americans suddenly fleeing to neighboring countries. In Afghanistan, we continue to kill civilians with “drones” only to repeatedly apologize, as if that relieves the families of the loss of their innocent loved ones.

What we see in Winter in Wartime is the devastation caused by war on the local inhabitants who were only trying to survive. Like it or not, we are reminded to care because the people who are suffering and dying remind us of ourselves. Well, if it is true that we are ALL endowed by our creator with certain inalienable rights, then maybe it’s long past time that we examine whether our continued wars in places like Afghanistan are worth the human cost.

2 thoughts on “Winter in Wartime”