While it is emotionally difficult to watch a climber try to ascend El Capitan without any type of supporting gear, the overwhelming majesty of watching a man risk his own life to ascend into the heavens allows you to conquer your fears. 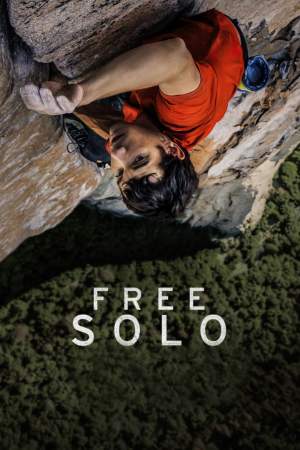 Free Solo is a stunning film that ranks with R.G.B. and Won’t You be My Neighbor? as the best documentaries of 2018. On top of that, it should receive serious Oscar consideration for the stunning cinematography.

Directors Jimmy Chin and his wife Elizabeth Chai Vasarhejli previously graced us with the documentary Maru (2015), a chronical of the first ascent of the “Shark’s Fin” route on Maru Peek in the India Himalayas. That film was a breathtaking account of climbers as they ascended sheer ice to sit 21,000 feet above the Ganges River in northern India.

Here, our directors create a cinematic masterpiece as they follow Alex Honnold as he attempts to climb El Capitan without any type of ropes or other assistance. The Yosemite Valley is one of the most beautiful places on earth, and you occasionally are left overwhelmed as you watch Mr. Honnold prepare to climb a rugged piece of granite to a summit 3,000 feet above the valley.

The film also allows you to learn what motivates rock climbers to risk their lives by climbing ridiculously difficult mountains around the world. In the process you learn that several well-known climbers have fallen to their death over the last 15 years and Mr. Honnold acknowledges that living to a ripe old age is not on his personal radar screen.

In additional Mr. Honnold has lived most of his adult life in a trailer as he travels the country. He makes his own food and supports himself through various teaching activities. It has proven tough for him to develop any type of social life for obvious reasons and here you see him finally hook up in a meaningful relationship with a young woman who is willing to embrace her boyfriend’s constant risk of dying young.

As Mr. Honnold and Mr. Chin’s film crew prepare for the final assault of El Capitan which took place in 2016, you watch the preparation with great interest. Mr. Honnold is filmed as he plots a climbing strategy with the help of ropes, occasionally falling when he reaches areas of unimaginable difficulty. You are left thinking the same thing as various crew members, “If this poor guy would have fallen to his death without ropes during his practice sessions, how on earth is he going to make it in his solo attempt.”

Even Mr. Honnold backs away for a few months as he begins to clearly question whether his goal can be achieved. Regardless, he soon decides that it is now or never, and he begins his ascent with various camera men dangling from ropes to film the climb at multiple levels. In the process, you watch Mr. Honnold cross over crevices in the granite 2,000 feet in the air as even a cameraman on the ground has to turn away in horror.

It was during these moments that you end up with sweaty palms as you sit in the theatre. As the camera shows Honnold grasping small openings in the granite with his fingertips, the camera looks straight down as our climber hangs thousands of feet above ground level. Those moments create some of the most powerful scenes ever to appear in any film.

It is giving nothing away to say that Mr. Honnold conquered El Capitan in a little less than 4 hours. As you see him standing on the summit talking to his girlfriend on a cell phone, you feel like he is talking to you when he says to her, “Please don’t cry or you will make me do the same thing.”