The Hate U Give

This is a film that wonderfully embraces the reality that black city residents and numerous police officers feel as they go through their daily lives. 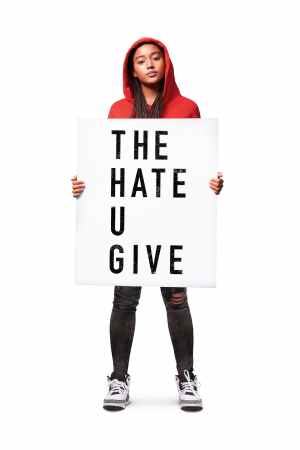 The Hate U Give, based on the popular book by Angie Thomas, is a penetrating movie on two surprising levels. The first deals with a sixteen-year-old black girl who watches her childhood best friend be gunned down by a police officer when their car is stopped for unknown reasons and he foolishly reaches back into the car for a hairbrush after being ordered out of the car. The second unexpected focus of the film centers on the role of police officers who have to patrol American cities dominated in sections by drugs, guns, and violence.

The sixteen-year-old, known as Starr Carter, is played magnificently by Amandla Stenberg. Ms. Stenberg is fascinating to watch as she wrestles with life in what was once referred to as the “inner city.” She is attending a largely all-white high school at the insistence of her father (Russell Hornsby), a dedicated man with a criminal record who hopes to give her the best chance of avoiding his mistakes. Attracted to Chris (KJ Apa in a surprisingly meaningful performance) and forming a friendship with Hailey (Sabrina Carpenter), both white students, she wrestles with the contradictions confronting her daily existence until her childhood friend Khalil (Algee Smith) is shot and killed as she watches.

Starr initially doesn’t know how to respond given her grief. While her heart breaks over the unconscionable shooting of Khalil, she also knows that he violated a principle rule taught to many black city residents, namely to always keep their hands on the dash of a car when pulled over. While Khalil insisted on standing by his rights to question why he was pulled over for doing nothing, the end result was what has been experienced by many African-Americans around our country to this very day.

What makes this movie work is its ability to spend time on life in our major cities. Public schools are reviewed as little more than an assembly line where a large number of black students either drop out, get pregnant, or turn to crime to make a living. In addition, when Starr finally comes forward to do an interview on television, she foolishly talks about Khalil’s involvement with selling drugs that brings heat on her and her father, who runs a convenience store. Anthony Mackie plays against type as the drug lord who employed Khalil, and he will do whatever is necessary to destroy those who point a finger at his organization.

In addition, Common gives a wonderful performance as Starr’s Uncle Carlos, a man who sympathizes with the daily duties of white city police officers. Sure, while he does not seek to justify police brutality, he emphasized that black citizens must understand the environment of a white police officer who doesn’t know if his life is on the line when he makes a traffic stop.

While I also want to point out a marvelous performance by Regina Hall as Starr’s loving mother, the film reminded me of my own experience when I taught the fifth grade at an all-black school in Indianapolis when I graduated from college. Even though my teaching experience was in 1969-1970, I learned firsthand what it was like to be a black kid growing up around 24th and Martin Luther King in Indianapolis.

In particular, and while I may have told this story before, there was a moment when three little black girls came into my class crying one morning. When I asked them what was wrong, they said, “Mr. Hammerle, we hate all white people.” When I asked what they were talking about, they told me about a truck filled with white guys who yelled the “n-word” at them as they crossed the street on the way to school that morning.

The Hate U Give encompasses all of the above, and it is an invaluable movie that you really should see. When I saw it here in Indianapolis, I was the only white person in the theatre. On top of that, two people sitting four seats down from me got up and moved so that they did not have to deal with the indignity of sitting next to a white patron in this type of film.

I fully understood, and I silently applauded their decision. I couldn’t help but wonder if they were my former students from 48 years ago.