Bad Times at the El Royale

The film contains 30 songs from the old days of rock and roll. The singing by Cynthia Erivo rivals Lady Gaga in A Star is Born. 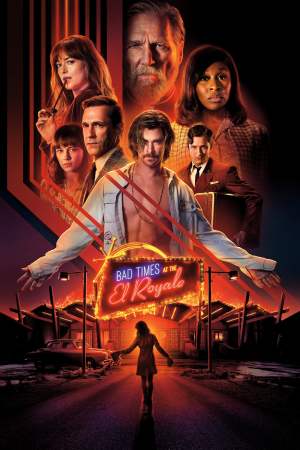 While this film will not be for everyone, Bad Times at the El Royale was one of the most innovative films I have seen in a long time. It is clearly a throwback to the Film Noir movies that dominated the cinematic landscape in the 1940s/50s.

It is cut out of the same cloth as Double Indemnity (1944), The Maltese Falcon (1941), Out of the Past (1947) and A Third Man (1949). It is filled with a mood of pessimism, fatalism, and menace as found in the definition of Film Noir itself. The movie is a collection of cynical attitudes and sexual motivations as seen in the work of such fantastic directors as Orson Welles, Fritz Lang and Billy Wilder.

The entire film takes place in the 1980s at an old hotel known as the El Royale which sits on the border between California and Nevada. The movie begins with a scene where an unknown guy checks into a room where he proceeds to pry open the floor where he buries a bag. A knock on the door follows where he is gunned down through the wall.

Ten years later seven separate people check into the hotel, and what follows is chaos that includes shootings, stabbings, a woman knocking out a man in a hotel lobby with a bottle of booze and a bit of humor that permeates many scenes. The female patrons are as sexy as the men are mischievous in many dirty fashions, and it takes a while to try to figure out what this movie is about.

Imagine Dakota Johnson, fresh off her regrettable performances in the Fifty Shades films, as a slinky woman traveling with her young sister (Cailee Spaney) with a long rifle and a nasty attitude. Add in Jeff Bridges as a creepy, would be Catholic priest who hides behind the claim of a failing memory. He ends up in a crazed relationship with a black woman known as Darlene Sweet (an effervescent Cynthia Erivo), a singer who belts out some great songs in her room.

On top of that you have Jon Hamm as a guy known as Laramie Seymour Sullivan, an alleged traveling salesman whose real identity, like everyone else, is eventually discovered. Since his great performance on TV’s Mad Men, he has overcome some rather lackluster movies such as Keeping Up with the Joneses (2016) and this year’s Tag with some great contributions in Baby Driver (2017) and last year’s Beirut.

Ironically, two of the most memorable performances are given by Lewis James Pullman and Chris Hemsworth. Young Mr. Pullman is working behind the desk at the hotel, and the conclusion of the film will ironically bring a tear to your eye as he seeks redemption from Bridges’ fraudulent priest. Mr. Hemsworth plays Billy Lee, the leader of a group of religious thugs who seem to live by the phrase “kill first and ask questions later.” It was great to see him bust loose from his role as Thor in the exceedingly popular Avengers films.

So, if you have a secret desire to see a Film Noir movie, then go see this one by director Drew Goddard who will take you back to the great cinematic days that captured Hollywood after World War II.