While this is not a Spielberg masterpiece, it has some spunk and charm that should put it on your must see list. 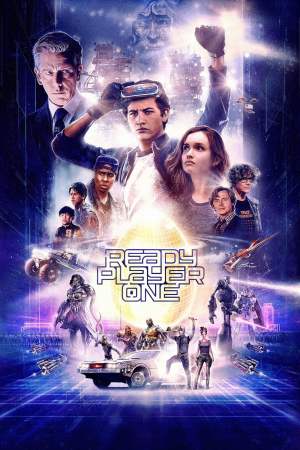 There is no denying that Steven Spielberg’s Ready Player One has its shortcomings, not the least of which is its length of 2 hours 20 minutes, but that just makes it a good movie by nearly any other director’s definition.  Set in Columbus, Ohio in 2045, the world is in a state of dysfunction.  Trailer parks have been converted to the equivalent of urban skyscrapers where these trailers are stacked on top of each other, and people try to escape the monotony of life through virtual reality.

The virtual reality world, known as Oasis, was created by James Halliday (Mark Rylance), a billionaire who recently died.  As his parting gift to the world, he has devised a contest where anyone capable of venturing into the challenges of the Oasis and finding three keys will inherit both his wealth and control of his magical kingdom.

And with that the contest begins.  A courageous group known as the High Five battles IOI, a poisonous conglomerate, and the winner will dictate the accessibility that average people have to Oasis.

Let me make the quick observation that anyone entering the Oasis is capable of changing anything they desire, including their identity.  You will be reminded of similar transformations that occurred in Jumanji.

In addition, the environment of Oasis largely reflects the entertainment world existing in the 1980s.  For example, you see a 1961 Ferrari from Ferris Bueller’s Day Off (1986); a great scene from The Shining (1980); pod doors from Stanley Kubrick’s 2001: A Space Odyssey (1968); the actual Iron Giant from the movie of that same name as well as a car from Back to the Future (1985).  You have to stay focused or some of this will pass by so quickly that it will escape your attention.

The High Five provide the strength of the film.  They are led by Wayne Watts, known in the Oasis as Parzival, a reflection of the name changes for nearly everyone entering the virtual reality realm.  Though Ty Sheridan fills this role with some sympathetic energy, the movie really belonged to Olivia Cooke in her role as his colleague, Samantha/Art3mis.  She is as captivating here a she was in the lovely film Me and Earl and the Dying Girl (2015) and you will never forget her fascinating red hair as she courageously treks through the Oasis as she tries to help Parzival.

While all of the other three High Five colleagues make memorable contributions, let me just mention the role of Lena Waithe as Aech.  You will always remember Ms. Waithe’s transformation from a talented, dedicated young black woman in the real world to a kick ass/take names male version of Hercules.

And then there is the significant contribution made by Ben Mendelsohn, playing Nolan Sorrento, the leader of IOI.  Hateful at every turn, no movie like Ready Player One can succeed without a villain that you desperately hope fails.  Few actors are better at playing a hero’s adversary, and hunt him down Australia (2008), Animal Kingdom (2010) and Killing Them Softly (2012) if you have any doubt.

Since the previews for this film left me in a bit of doubt, I decided to see it at the IMAX at the downtown Art Museum here in Indianapolis.  As noted before, I have never been in a better theater anywhere in the world, and it has the ability to make even average movies look good.  That is especially true when you have tremendous special effects as seen in Ready Player One, so take the time to see it and let me know what you think.

← The Death of Stalin
Commentary on Early Voting →