Let me just say that even you cynics will regret missing this Christmas gift. 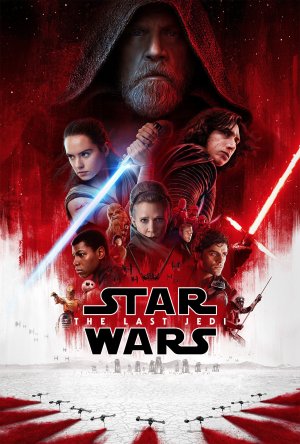 Star Wars: The Last Jedi is a film that defines why many of us love the movie experience. I saw the first Star Wars movie when it was released in 1977, and it carved a special spot in my cinematic soul. As he descended to impending doom, who can forget Hans Solo’s sarcastic response of “I know” to Princess Leia as she said, “I love you”.

The bottom line is that Star Wars movies make the viewer of any age feel young again. Sure, Harrison Ford’s Han Solo died in the last film in the series while Carrie Fisher left us in real life this past year, but young actors make sure that none of us forget the mantra, “May the Force be with you.”

It doesn’t really matter that the basic plot hasn’t changed in any of these films. It’s significance rests on both the enchanting music by John Williams and that you care about all of the characters in the film, both good and bad. The simple fact is that their interpersonal relationships have meaning.

With our rebel group dancing on the verge of being wiped out, Rey (Daisey Ridley) tries to convince a reclusive Luke Skywalker (Mark Hamill) to come to the rescue. In the meantime, Finn (John Boyega) and Poe Dameron (Oscar Isaac) are left to battle a superior destructive force led by Snoke (Andy Serkis), Captain Phasma (Gwendoline Christie), General Hux (Domhnall Gleeson) and the unforgettable Kylo Ren (Adam Driver).

While all of these actors, including the wonderful Laura Dern as the rebel Vice Admiral Holdo, make meaningful contributions, let’s start with Ms. Ridley’s interaction with Mr. Hamill. Though she needs the last Jedi to return to combat, how does she overcome the simple fact that he is an aging man who simply wants to die peacefully in isolation?

And while the dedicated Finn wonders if his friend Rey is still alive, he teams with Rose (a completely delightful Kelly Marie Tran) to infiltrate and destroy a key enemy spaceship. Boyega’s Finn and Tran’s Rose develop a closeness that transcends friendship, and her possible death will leave you as crushed as Finn.

And then there is the dynamic performance of Mr. Driver as Kylo Ren, a Nazi-like villain who has a heart that he is trying to crush. Despite the fact that he killed Hans Solo, his father, in The Force Awakens, his attraction to Rey keeps you hoping that he finds a way to escape the dark side. The answer will not surprise you, but Ren’s journey is one of the captivating features of a captivating movie.

Whether you see it at an IMAX theater or on a regular screen is completely irrelevant. Just see it.

← The Shape of Water
Movie Reviews →