Kathryn Hahn joins Kate McKinnon from Ghostbusters as comic actresses to be praised in 2016. 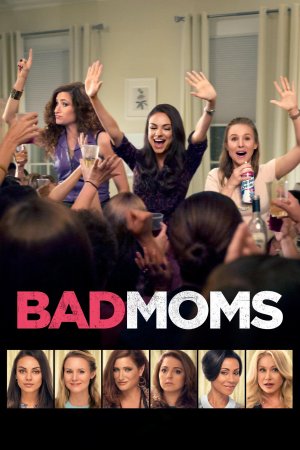 Bad Moms may turn out to be one of the sleeper hits of 2016.  It is at times dark, dirty, vulgar and profane, but it is also incredibly funny.  80% of the national audience on its opening weekend were women, and their repeated laughter provides the best review of this R rated film.

Sure, there are times when the film, directed by The Hangover duo Jon Lucas and Scott Moore, goes one bridge too far, but it really doesn’t matter.  No one knows better than women the speeding train they are forced to ride as they balance the demands of the workplace, children and marriage.  What could possibly be so hard to make breakfast for the kids in the morning, get them off to school, settle into your job, make sure the kids eat properly in the evening while helping them with their homework, attending their athletic events and then greet a husband as he returns home with the inevitable question, “And how was your day, dear”?

Ms. Bell is the mother of four who must continually dance to the demands of a clueless husband, while Ms. Hahn dominates the movie as a profoundly vulgar woman whose principle goal is to get as intoxicated as possible while getting laid by whomever is available.

As these three women become friends, you share the pleasure that they find in each others company.  However, Ms. Hahn gives a breakout performance as a sarcastic woman who uses four letter words in the same magnificent style that Picasso used oils and canvas.

Christina Applegate plays the protagonist Gwendolyn, the head of the PTA who will take no criticism.  In a sense she is a female Donald Trump, a conceited soul that considers herself the center of everything going on in the local school.

I was the only male in the audience when I saw this film, and I laughed nearly as loud as the female audience.  While all of the men in this movie were functional idiots, you couldn’t help but feel that the female viewing crowd saw a bit of real life appearing on the screen.

I should note that this movie does not ignore the meaning of sex, both approved and socially condemned, throughout the movie. I laughed at myself as I wondered if there was a Kathryn Hahn character sitting near me. Though I was wearing a tie and a long sleeved shirt with cuffs, I regretted not smuggling a bottle of wine into the movie.  I have caustically told both male and female friends that if a guy plays his cards right, I’m sure he could have had a tawdry encounter before reaching his car in the parking lot.

Let me close by encouraging all of you to stick around for the final credits. The female leads appear with their mothers in real life and their conversations create a bond with all of the women who have bought a ticket.  This film acts as a therapy session where all mothers can experience the forbidden pleasure of being bad.