Think of little people from a small town in Kentucky raising a horse that becomes a legitimate competitor in the races for the Triple Crown. God, it was enthralling to watch good things happen to powerless people. 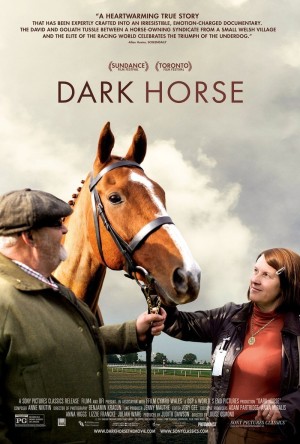 Dark Horse is a lovely documentary by Louise Osmond that will warm your heart as it focuses on the relatively poor people living in a Welsh mining town around the beginning of the 21st century. Fighting to keep a decent meal on the table, a local barmaid convinces many of her friends and town residents to pool their money to breed and raise a race horse that would compete in the English competition known as the “sport of kings”.

In the process, you see many of the residents interviewed as the little foal is raised and grows to become a competitor against all conceivable odds. English horse racing was the sport of wealthy aristocrats, and the appearance of a group of miners and bar patrons at the track breathes life into the human condition.

The horse, known as Dream Alliance, succeeds in many races only to suffer a terrible injury that takes him to the brink of death. He survives to race again, and you end up cheering almost as loudly as his lower middle class owners. While the film would have been helped had Director Osmond concentrated a bit more on the personalities and lives of various town residents, it really didn’t detract from the overall impact of the film.

The movie shows little people having a moment of national glory in a sport where they would otherwise be unwelcome, and that makes this film a pleasure to watch.

← Wiener-Dog
The Secret Life of Pets →

One thought on “Dark Horse”