It is ironic that I neither recommend nor condemn this film. It is like a Disney World ride that intentionally evokes human misery. 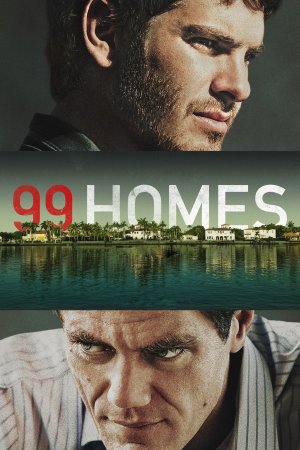 With 99 Homes, Michael Shannon is at his unnerving best playing Rick Carver, a real estate entrepreneur in Orlando, Florida who specializes in evicting people from their foreclosed homes while defrauding banks in the process. Taking place in 2010, you watched grief stricken parents being forced to evacuate their homes under orders from Mr. Carver and his police assistants, and the grief you gradually feel becomes nearly unbearable.

Along with his mother and young son, a guy named Dennis Nash becomes one of the victims of this massive foreclosure, and his family is left in anguish as they are forced to leave in a truck after being given two minutes to remove whatever possessions they could carry. Andrew Garfield will carve a place in your heart as Mr. Nash, and the pain being experienced by he and his mother (an expected wonderful performance by Laura Dern) is not helped when they are left with no other choice than to move into a rundown motel.

Mr. Shannon plays one of the most horrid human beings to hit the screen this year, and no one is better at playing a psychotic, rancid bastard. Building on numerous roles ranging from Revolutionary Road (2008), Mud (2012) and The Iceman (2012), he functions as the American equivalent of a son of a Nazi SS officer as you observe him ridiculing homeowners whose hearts are breaking.

In particular, watch for an opening scene and Mr. Shannon’s acerbic, heartless reaction to a father who kills himself while his wife and children are crying in another room. You feel that you are watching the offspring of Heinrich Himmler as he comes home from an average day at Auschwitz.

The film reaches its apex as it gradually succeeds in crushing your spirit. Mr. Nash, unemployed, takes an unexpected job assisting his real estate executioner to help with various handyman jobs. While he initially views his new employment as temporary, his need of money causes him to look the other way as he becomes a right hand man to Mr. Carver. In the end, he begins to do the very thing to others that he suffered himself, and the guilt gradually overwhelms him, his family and the viewing audience.

This is a film that shows how fortunes are made on the backs of American working families. At its core, this is a dark, depressing movie about how the rick get richer in a country where the poor and middle class are simply urged to quit whining and accept their lot in life. While billionaires continue to receive massive tax breaks in a country where we are called upon to worship the economic God known as capitalism, the wealthy fund a political system where any attempt to raise the minimum wage or provide necessary food stamps is treated like an undeserved handout designed to limit human achievement.

Though I think you fully understand the emotional impact of this film, as I watched it alone in a theater I was forced to stand and walk around briefly just to relieve the tension. This becomes an awfully good film that vividly describes those who participate in the destruction of the American dream. As a reviewer and a student of history, I’m delighted that it was made and I am relieved that I won’t have to see it again.

← He Named Me Malala
Beasts of No Nation →