Ricki and the Flash

If your attraction to Ms. Streep is similar to Ulysses attraction to Circe and her island of tempting singing vixens, then buy the soundtrack and avoid this film. 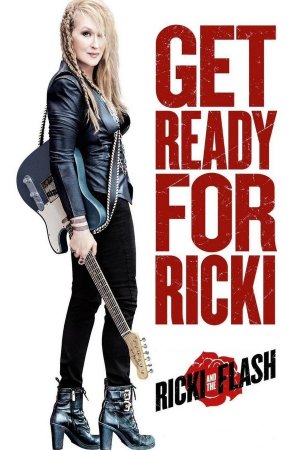 If honesty prevailed in Hollywood, Director Jonathan Demme’s Ricki and the Flash would have been entitled “Ricki and the Flash in the Pan”. It is impossible to imagine what Mr. Demme hoped to gain from this messy, frequently offensive film.

Never before in her long distinguished career has Meryl Streep played a more profoundly dislikeable character. She had no grace, no charm and not an ounce of compassion.

Screenwriter Diablo Cody won a deserving Oscar for Juno (2007) but she is not going to be recognized at any level for this regrettable effort. Quite frankly, the only reason that I can figure that Ms. Streep wanted to play the role of Ricki was the fact that her daughter Mamie Gummer plays her on-screen daughter. This film ended up resembling a bad home movie in much the same fashion After Earth (2013), a cinematic disaster where Will Smith conveniently sought to have his son appear as a co-star.

To get an idea about how astonishingly hateful Streep’s portrayal of Ricki became, consider the fact that she plays an aging divorcee living in California who walked out on her husband and three young children decades earlier to pursue a singing career. Consider further that she had absolutely no contact with her children as they grew into adulthood, and you will understand the bitterness I felt as I left this movie.

To make matters worse, Ricki’s singing career went nowhere. Reduced to singing with her band in a low-rent bar, she was a complete disaster, and it was impossible to feel sorry for her at any level.

The film focuses on Ricki receiving a call from her ex-husband, played with little enthusiasm by Kevin Kline, a successful financier living in splendor in Indianapolis on an estate that will remind you of Geist. It seems that Ricki’s long forgotten daughter was left emotionally catatonic after facing a sudden divorce, and it was somehow hoped that Ricki could offer emotional support. The whole idea was patently ridiculous, as who could imagine that Ricki could help a daughter whose wedding she was too preoccupied to attend?

A number of pointless encounters happened when Ricki returned to Indianapolis, including her interaction with her ex-husband’s caring wife. Streep’s dismissive approach to this kind woman, a woman who had dedicated herself to raising Streep’s children, makes you dislike her even more.

Quite frankly, the only good thing about this film was the music, and Streep’s singing with a guitarist played by Rick Springfield, her on and off boyfriend, is the highlight of this movie. Several of these songs reminded me of the several hundred scratched albums I purchased in the 1970s-80s that I still have stored in the basement of my home. The music caused me to reflect back on an era long gone, and watching Ms. Streep sing made me almost forget her ridiculous hairdo that partially resembled Bo Derek’s golden locks in 10 (1979).

The movie was really about an aging woman seeking redemption for her many selfish decisions throughout life, redemption that was not deserved on any level. The only thing that Ricki seemed to be proud of was that she had voted for George Bush twice and not President Obama, something that I am sure sat well with her ex-husband’s African-American wife. She was proud of her ridiculous hairstyle and large American flag tattooed on her back, and you could only hope that she sings as the opening act at one of Donald Trump’s national speeches. They deserve each other.

2 thoughts on “Ricki and the Flash”