My foreign exchange student thought the film was “okay”. At least he didn’t say, “It sucked.” 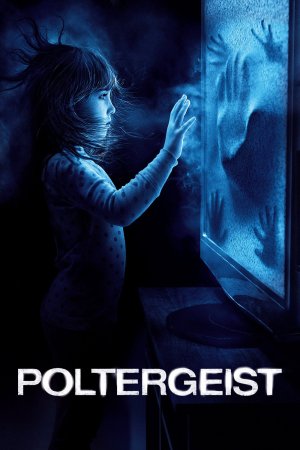 From my standpoint, the three greatest horror films released since 1950 have been Invasion of the Body Snatchers (1956), The Omen (1976) and Poltergeist (1982). While all three were frightening, their magic came from producing a psychological edge that transcended the special effects.

In addition, all three became serviceable as metaphors in real life. For example, what if the “pod people” were really modern-day members of the Tea Party?  What if Damian had a last name of Bush or Clinton? What if Carrie Ann (the original Poltergeist victim) got sucked into the TV and had to spend eternity on the Fox News Channel?

Regardless, any producer is left dancing with wolves if he or she attempts a remake of any of the above films. Though it was attempted with The Body Snatchers in 1978, it came up empty despite starring Donald Sutherland and Leonard Nimoy. Though the new Poltergeist is an adequately entertaining film, it falls far short of the magic produced by Mr. Spielberg’s original film.

Once again, a little girl now known as Madison is enticed into a closet where corpses seek revenge for the mutilation of their cemetery. Additionally, you still have the same gnarly tree growing outside her brother’s window, and a nasty clown still is causing torment.

What hurts the film is that the plot is robbed of its subtleties that Mr. Spielberg used to great effect. Basically, it amounts to a family of five moving into a new home where they are unaware that the housing addition has been built on an old cemetery. The father is unemployed, times are tough, and parents flirt with insanity when their missing daughter is able to occasionally talk to them through a malfunctioning TV. Just when they are about to begin to worry about student loans this happens!

What saves the film is the performance of the adult characters. To begin with, Sam Rockwell plays against type as the father who simply wants his daughter back. He is a wonderful comedic actor, and he has proven that over the years with performances in Seven Psychopaths (2012) and The Way Way Back (2013) among others. Here, he provides some much-needed levity as he is forced to confront the absurd reality of seeking assistance of paranormal experts.

In addition, Rosemarie DeWitt thankfully doesn’t overact as a tearful mother left focused on recovering her daughter. However, Jared Harris makes the film work as the one guy with the talent to make reluctant ghosts cough up their hostage.

In the end, the new Poltergeist played out like a tolerable Cliff Notes version of a film all but unknown to a younger generation. However, for those of us who “were there”, I truly miss the performance of Zelda Rubinstein who originated Mr. Harris’s role. Never in the history of film has there been a more erroneous proclamation than, “This house is clean.”