Far from the Madding Crowd

This film largely fulfills expectations, which includes some fantastic scenery of the English countryside. 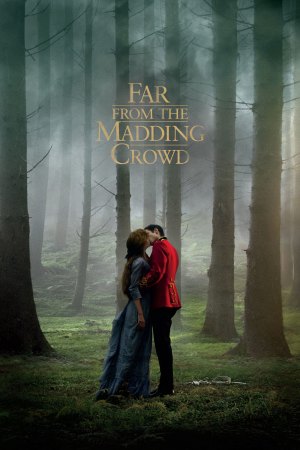 Though it comes a bit unraveled as it nears its ending, Far from the Madding Crowd does a sterling job recreating life in rural England during the last half of the 19th century. Taking place in 1870, we watch as Bathsheba Everdeen tries to remain true to her commitment of remaining an independent woman.

After she inherits a large farm north of London following the death of her father, she tries to function in a world dominated by men. The movie focuses on three quick proposals from very different Englishmen, and Bathsheba initially rejects them with grace and dignity.

Unfortunately, despite being a very smart, energetic woman, Bathsheba decides to marry the weakest member of her courting trio, an English military sergeant with the morals slightly below the sheep she raises on her farm. Disaster befalls everyone, and it is the story of this disaster that robs the film of some of its elegance.

However, let me say that Carey Mulligan gives a fantastic performance as Ms. Everdeen. She is cool, alert and at times very funny. Early on, she tells one of her suitors that she views the idea of becoming a bride as very exciting if you could eliminate the requirement of having a husband. Smart woman.

Additionally, it doesn’t hurt to remember her memorable performances in An Education (2009), Never Let Me Go (2010), Drive (2011) and The Great Gatsby (2013). This is an English actress with incredible talent that makes nearly any movie worth seeing.

In addition, the same thing can be said about her three suitors, played by Matthias Schoenaerts, Michael Sheen and Tom Sturridge. Though Mr. Sturridge’s performance as the Army Sergeant leaves us with a character who is easy to hate, Mr. Sheen is superb playing Willing Boldwood, a middle-aged, wealthy bachelor who is looking for company. He is a likeable guy and is willing to give Bathsheba all the time she needs to make a decision after requesting her hand.

However, you quickly know who is going to win this contest in the end, as Mr. Schoenaerts’s portrayal of Gabriel Oak proves to be the most loyal of the group. In addition, it doesn’t hurt that he is the most handsome. And if you’re trying to remember if you have ever seen Mr. Schoenaerts perform before, then hunt down both last year’s The Drop and the tantalizing Rust and Bone (2012).

I would be doing a disservice to everyone if I did not refer to Director John Schlesinger’s original interpretation of Far from the Madding Crowd. Released in 1967, you’ve got to see Julie Christie’s sterling performance as Ms. Everdene, a role that Ms. Mulligan handles with grace and dignity.

In addition, it is also worth recalling that Terrence Stamp, Peter Finch and Alan Bates played Ms. Everdeen’s suitors, and their performances all stand the test of time. Unfortunately, I only have a vague recollection of the original release, so I will leave it up to you to make a comparison.

Let me conclude by saying that Far from the Madding Crowd pays tribute to Thomas Hardy’s novel. You get to relive what life was like for a woman trying to avoid commitment to any man in Victorian England, and you are left with a film that commands your attention.