Before buying a ticket, see the original Neighbors which was released in 1981. Both have more laughs than groans. 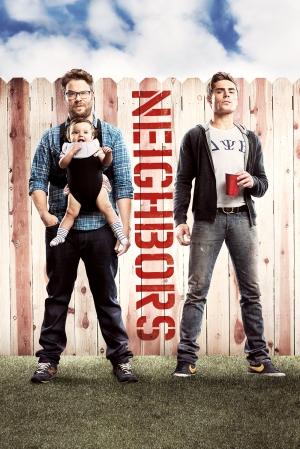 The movie Neighbors is a manifestation of Seth Rogan’s acting career, namely wildly funny and profoundly vulgar. Thank God for the sterling performance by Rose Byrne, because without her this film would have embraced sexism in the same fashion as the regrettable owner of the Los Angeles Clippers, Donald Sterling.

The plot of the film is rather simple, namely a young married couple, played by Rogan and Byrne, living in a suburban home with their young child that is being nursed by her mother. For unexplained reasons, the house next door is sold to a college fraternity, and anything that can go wrong quickly does go wrong.

Neighbors is best described by the title from the great Sergio Leone spaghetti western, The Good, the Bad and the Ugly (1966). Rogan is at his best and worst as a besieged father who is both alienated and attracted by the fraternity’s excesses. Though he finds the loud noise annoying and intrusive, he has no problem with smoking pot and drinking to excess with the college boys.

The fraternity is led by Zac Efron and Dave Franco, who play it’s President and Vice President. Efron is quite effective in a surly role where he just wants to be remembered for his excesses. Franco is far more serious if you can excuse his banging Efron’s date when both get a bit blasted.

My 15-year old niece, who snuck into the film with the consent of her mother, had the greatest critique of Neighbors. Seeking no consolation from her twisted mother, who after all is my youngest sister, she said, “The film wasn’t bad, but I would have liked to have seen Efron go shirtless a few more times.”;

Again, what saves the film is the performance of Ms. Byrne. Though she and Rogan appear to be carved out of the same slab of rock, she has a nasty streak that allows her to accept the most diabolical alternatives if it will lead to the removal of the fraternity from her neighborhood. She is an Australian actress, and it is worth remembering her contributions to a variety of roles ranging from 28 Weeks Later (2007); Get Him to the Greek (2010); Bridesmaids (2011) and X-Men First Class (2011). This is a talented actress with range.

What has troubled me about the national reviews is that nearly everyone, for unknown reasons, ignored the fact that it is an updated sequel to the original Neighbors which appeared in 1981. Directed by John G. Avildsen and starring John Belushi and Dan Aykroyd, it also was based on a peaceful suburban loner whose lifestyle is upended when a deranged couple moved in next door. In the original film, Dan Aykroyd and Cathy Moriarty played the wretched new neighbors who haunted Belushi, and the remake has been altered by simply replacing the protagonists with a fraternity.

Regardless, both films are worth seeing despite the fact that they are hit and miss entertainment. Seth Rogan doesn’t do a bad job of being a modern day John Belushi, so I will leave my critique with that compliment.