This Is the End

Rating: If you want a very funny film where Hollywood stars make fun of themselves, overcome your doubt and see this movie. And it doesn’t need to be seen on the big screen, so keep that in mind. 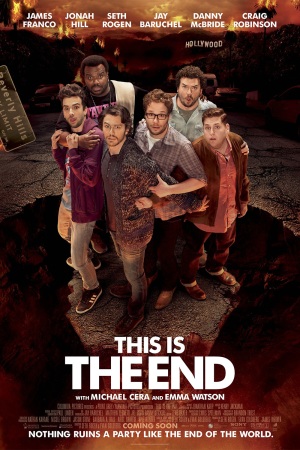 Given the fact that the first two weeks of September generally reflect a dead zone in Indianapolis concerning new movie releases, I was thankful that This Is the End re-entered several movie theaters. I missed it the first time, and I was always intrigued given the fact that several friends really liked it.

Well, let me simply say that I joined their group. Co-directed and starring Seth Rogen, it is an hysterical romp as our stars face the arrival of the Apocalypse and the end of life on Earth. It is crazed, demented and profane in every respect, and it is a wild ride while our gang faces either a trip to Heaven or Hell.

As most of you know by now, the film stars a handful of Hollywood actors playing themselves. In the process, they make fun of their own image, particularly James Franco, Danny McBride and Michael Cera. Particularly in Mr. Franco’s case, he gets to point a nasty finger at himself, proudly playing the smug asshole that many of us imagine him to be in everyday life.

As Franco puts on a gaudy party at his garish L.A. home, havoc is unleashed on the world. The Hollywood Hills are set aflame, and Franco, Rogen, Jay Baruchel, Craig Robinson and Jonah Hill are left holed-up in Franco’s home. Chaos awaits.

As noted, every actor makes fun of his public image, which is the ultimate strength of the film. In the process, they frequently refer to their earlier films, even to the point of visiting Franco’s collection of movie memorabilia that he keeps in his basement. Typical of the sardonic humor is the need for Franco to correct one of the boys when he says, “You got this when you filmed the 27 Hours, didn’t you?”, to which Franco immediately yells, “You mean 127 Hours.”;

Regardless of your perception of this comic nonsense, you should watch for Jonah Hill’s manic portrayal of a madman after the devil inhabits his body. And while I don’t want to give it away, the end scene where some of the boys end up in Heaven provides hope to us all. Who wouldn’t love the afterlife where you could smoke pot and dance with scantily clad male and female friends while The Backstreet Boys performed on the good side of the Pearly Gates.

What is ironic about the film is that several of the stars were far better at playing themselves than they were at fictional characters. Craig Robinson failed in Peeples (2013), as did Seth Rogen in The Guilt Trip (2012). Franco was terrible in Spring Breakers (2012), though I must say that Emma Watson was as singularly enjoyable here as she was in The Perks of Being a Wallflower (2012).

I don’t pretend to know what all this means, but Rogen’s safe in Heaven while Franco roasts in Hell, so you figure it out.