First, remember that it has been nominated for an Oscar in the Makeup and Hair Styling category. Secondly, Knoxville is the most appallingly loveable character since Billy Bob Thornton in Bad Santa (2003). 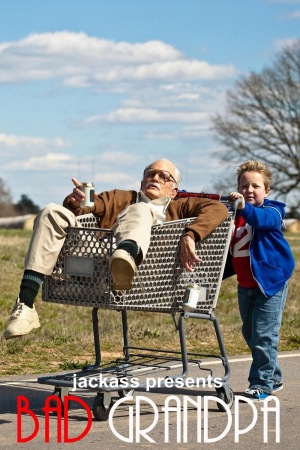 Though I should have seen Jackass Presents: Bad Grandpa while it was playing in the theater, I just couldn’t pull the trigger. Though I truly did like Johnny Knoxville in the original Jackass film (2002), its sequel was largely a waste of time. Quite frankly, I feared that he was going down the road of Tyler Perry, where he could do little more than the same thing over and over again under the guise of doing something original.

However, I was wrong, dead wrong. First and foremost, I know many of you will not be able to stand the cinematic pain, so just steer clear. However, the reality is that the film is excruciatingly funny at times, often as barbaric as it is profane.

What is significant to know is that Director Jeff Tremaine breaks with Jackass tradition and actually brings us a film with a meaningful plot. There is a drama taking place underneath the surface of this raw, sexual monstrosity, and you actually end up caring about Knoxville and the young boy playing his grandson.

In other words, there actually is a plot. Knoxville plays the 86-year old Irving Zisman, an elderly grandfather whose wife has just been found dead in the family home. Desperately trying to escape the presence of his grandson, he now is forced to drive from Lincoln, Nebraska to the East Coast to place the lad with his demented biker father. It seems that Mr. Zisman’s grandson’s mother is in prison, so the duo takes off from the exact location that Bruce Dern and his son sought to land in this year’s Oscar nominated Nebraska.

Needless to say, madcap high jinx occur during the entire trip. First of all, Zisman has his dead wife put in his car trunk as he tries to decide where to bury her. When his grandson objects, Zisman asks, “Didn’t you love your grandmother?” When the kid responds, “No”, Zisman dismisses him with the loving observation, “That is probably what killed her.”

Zisman’s exploits take him from bingo parlors to strip clubs, and he regularly reverts to a rabid, sexually starved human coyote. His grandson is forced to either wait in the car or in a cheap motel room where his dead grandmother is left laying on the floor, and I’ll let your imagination run wild on how those events turned out.

You’ve undoubtedly seen some of the funny scenes in the previews, which include Knoxville flying through a window when a children’s spaceship malfunctions in front of a store, not to mention dressing his grandson up as a little girl where she mutates into a stripper at a children’s pageant show.

However, without giving anything away, the most outrageously funny scene in the film is when Knoxville hunts down a strip club which is being advertised as “Ladies Nite”. Ignoring the fact that he is the only white patron in the facility, he ends up imitating some incredibly muscular black men dancing as Chippendales by wearing nothing but his underwear. It ends up being a scene for the ages.

But what you watch develop in the film provides its allure, namely the growing bond between grandfather and grandson. Though grandad could have been justifiably arrested in any State that he crossed by the local  Children’s Protective Service agencies, he nonetheless is not going to let his grandson be handed over to an uncaring biker father.

On the other hand, please don’t think that Jackass Presents: Bad Grandpa becomes remotely morally redeemable in the end. Just wait ‘til you see how our boys decide to bury dead grandma!

← Commentary – What is Tradition?
3 Days to Kill →