We Bought a Zoo

An intellectual surprise by any definition. 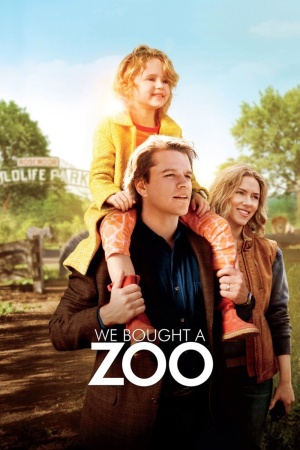 Since we have just started 2012, and I am proud to say that I have yet to be run over a second time by a motorcycle, let me ask all of you what movie amounted to the biggest surprise in 2011? While you ponder that question for a moment, I can give you mine, namely that Cameron Crowe’s We Bought a Zoo is incredibly fun. Though it has obviously been some time since Mr. Crowe gave us anything remotely watchable, this film is an utter delight from beginning to end.

The film centers around Matt Damon playing Benjamin Mee, a father of two children trying to find some meaning after the recent death of his wife. Colin Ford plays his 14 year old son, Dylan, a young boy still fighting to adjust to his new life and suffering father. Maggie Elizabeth Jones plays Rosie, an 8 year old daughter who is as insufferably cute as she is profoundly amusing.

As Damon confronts the reality of quitting his job as a writer, he buys an abandoned zoo for reasons even he can’t explain. With the property being maintained by the State in the hopes of obtaining suitable ownership, Damon and his kids find themselves the confused but proud owners of a group of large animals and determined employees.

While all of these employees give zoo workers a good name, Scarlett Johansson demonstrates that she is capable of being a fine actress if she can just appear without any makeup and a bad hairdo. Dedicated to the health of all of the animals, it is apparent that she and Damon are about to engage in a confusing though loveable little emotional waltz.

Additionally, Thomas Haden Church plays Damon’s brother Duncan, a decent man who is filled with goofy opinions and little direction. As he has done so well in previous movies, Mr. Church helps Damon through some tough times by repeatedly giving him bad advice that his brother is smart enough to ignore.

As I said at the start of this review, I really thought that this film had to be a woeful loser from the time that it hit the theater. It looked as corny as it appeared to be insufferable, and it was hard to imagine how it could possibly effectively hold the interest of an audience, particularly given the fact that it lasted a little over two hours.

Regardless, somehow and some way Mr. Crowe was able to make this film work on multiple levels. It is to his everlasting credit that he was able to rediscover the strength of his old, classic film Almost Famous (2000) while ignoring the weaknesses of both Vanilla Sky (2001) and Elizabethtown (2005).

There are a number of really effective scenes in We Bought a Zoo, the most powerful being an exchange between Damon and his son as they try to confront their alienation. Strangely, in some unfathomable way it is far more emotionally satisfying that Steven Spielberg’s War Horse, and I can only encourage all of you to give it a shot. Quite frankly, regardless of its uninspired title combined with previews that undoubtedly left most of you shaking your head, I have yet to talk with anyone who has not spoken wonderfully of their experience.

← The Darkest Hour
The Devil Inside →