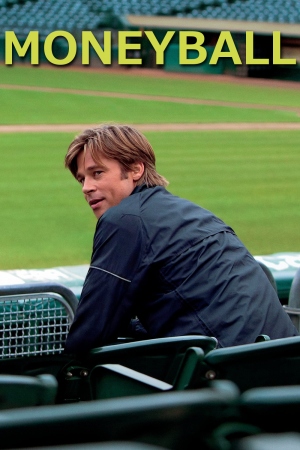 “How can you not be romantic about baseball?” The answer to this intriguing question posed by Oakland A’s General Manager Billy Beane, the subject of Moneyball, will likely dictate whether you find it to be a penetrating, enriching movie experience, or simply a damned enjoyable one.

As for me, I must confess as a disclaimer that I grew up as a kid with a profound love of the game, developing as early as Little League a visceral attachment to what I refuse to stop calling our National Pastime. During my pre-teen years in the 1950’s in the small town of Batesville, Indiana, we boys played pickup games all summer long, developing along the way a pre-flouride history of cavity problems due to the cardboard-like chewing gum that came with every pack of baseball cards that we would religiously collect.

While I still have a strong attachment to the St. Louis Cardinals, primarily because my mail carrier father was a great fan, few moments in my life exceed the time in 1954, at the age of 7, when I won a nationally sponsored Coca-Cola contest and was flown to Cleveland with my father for a World Series game between the New York Giants and the Indians. The only downside was that I also became a lifelong fan of the Indians, something that has proven to be more of a curse due to their last half century of consistent ineptitude.

But baseball fans or not, I suspect Moneyball will be embraced by most movie lovers. First and foremost, it has a sparkling, witty screenplay co-written by the accomplished Aaron Sorkin and three colleagues. As you would expect, Mr. Sorkin fleshes out characters that are all the more human because of their flaws. However, at no time are they hackneyed or dull.

Additionally, just as you didn’t need to be a computer geek to fully appreciate his spectacular screenplay in last year’s The Social Network, set aside your concerns about baseball as a sport. Moneyball at its heart is a tale of the little guy trying to triumph against seemingly insurmountable odds. While life is fundamentally unfair, pure and simple, Moneyball reminds us that true fulfillment does not come so much from winning as it does from never giving up. Put another way, it is about always having high hopes.

Based upon the book by Michael Lewis, “Moneyball: The Art of Winning an Unfair Game”, Moneyball tells the story of Billy Beane, the General Manager of the Oakland A’s at the turn of the 21st century. Played with impish earnestness by Brad Pitt, Beane was and is involved in the yearly struggle to compete against teams like the New York Yankees and the Boston Red Sox whose payrolls are at least four times larger than his.

Though there are evocative scenes of the game itself, Moneyball is really a story of the business side of baseball. In a wonderful moment where Pitt is at his best, he succinctly lays out the problem the A’s face in words to the effect:

It’s a great description of the inherent unfairness of the financial structure of baseball that haunts it to this very day.

In Beane’s case, the A’s were coming off a season where they made it to the playoffs only to be defeated by the Yankees. Though winning the first two out of a best of five series, they had their hearts ripped out by losing the next three games. To add insult to injury, the Yankees and Red Sox then raided their roster to grab the A’s top three free agents, provoking Beane to memorably state, “We are little more than organ donors for the bigger clubs.”

Faced with this dilemma, Beane knew he couldn’t survive unless he began to think outside the box. And Moneyball begins to shine brightest when he hires Peter Brand, a young economics major with a degree from Yale who was developing a groundbreaking computer analysis of player performance that subsequently revolutionized the game. Jonah Hill is perfect as a young, shy Mr. Brand, and he sheds the more ostentatious elements of his acting persona as seen in the admittedly funny Superbad (2007) while hanging on to the introverted reticence displayed in the uproarious Get Him to the Greek (2010).

Beane and Brand form a wonderful partnership as the ultimate odd couple. Notably, there are several memorable scenes where Beane meets with his collection of old-school baseball scouts, stating to their utter astonishment and amazement that they are going to listen to this wet-behind-the-ears, pudgy Yale graduate in the future and not their customary by-the-book thinking. Those moments where you see these disparate characters treating each other as if they have just visited from another planet are tense, perverse and quite funny.

But what you also see in Pitts’ performance is the portrayal of a man who is paying the price of his workaholic dedication to the game of baseball. This is on poignant display during brief moments where he visits his ex-wife (Robin Wright), moments where you get the distinct feeling that there remains a bond between the two that has never been completely severed. In addition, his interaction with his teenage daughter while she is playing a guitar and singing him a song she has composed are truly special. (I should note that the song sung by his daughter, ”The Show”, may very well receive some consideration at Oscar time).

Not to be overlooked is the great Philip Seymour Hoffman playing Art Howe, the real-life manager of the Oakland A’s. As he does with every role, Hoffman brings a sense of realism and pathos to his character, here as a manager far more at home with trusting his own instincts than some new,
untested theory spouted by a nebbish, inexperienced school boy.

As I watched Pitt’s Beane ask the seminal question I began this review with, “How can you not be romantic about baseball”, I can only think of the greatest male romantic film ever made, Field of Dreams (1989). Guys, and particularly guys from my generation, understand that movie, pure and simple. As James Earl Jones so solemnly stated at one moment in the film, “It’s called baseball, Ray.” It’s about long-lost legends coming back again and having a moment in the sun on the diamond. It’s about restoring dignity to a lost soul like Shoeless Joe Jackson. It’s about giving an aging doctor a chance to relive his dream and have at least one at-bat in the major leagues.

It’s not just a game, and it never has been. Think of such great baseball movies like The Pride of the Yankees (1942) where Gary Cooper played the dying Yankee Iron Horse, Lou Gehrig. Think of John Sales’ heartbreaking film Eight Men Out (1988) which tells the crushing story of Shoeless Joe and the Black Sox scandal of 1919. Go watch Bang the Drum Slowly (1973), and relive the magic of a movie about a meandering team that found success when they rallied around Robert Di Nero’s hillbilly backup catcher who was dying of cancer. And yes, it is worth recalling why Kevin Costner’s Bull Durham (1988) and The Perfect Game (2009) still have resonance to this day.

But more than anything, there is a romance about baseball because to hear the sound of a ball hitting a mitt is to instantly remember that moment in one’s youth where you engaged in the simple act of playing catch with your father.

Yes, unknown voices told Costner in Dreams, “Build it and they will come.” Moneyball follows in that same magical spirit, and makes for a splendid movie experience whether you hear those voices or not.