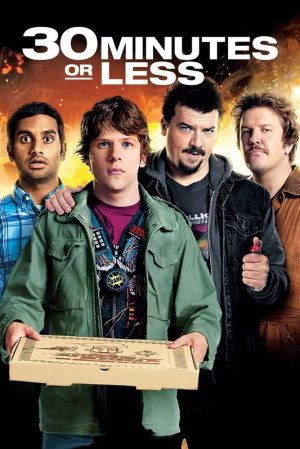 Sometimes the fickle finger of fate can deal a human being a cruel hand and Lord God did it unload on me!

Last Friday afternoon I was able to leave the office a bit early with the intention of seeing the movie Another Earth. Though I knew it was going to be a slow, somber reflection on life and its perplexing vicissitudes, I was in the mood for a film where I could calmly sit and philosophically reflect on human existence.

Unfortunately, when I arrived I was told that they were having projection problems, and this was the one movie that was cancelled. Being a resourceful guy, I discovered that I still had time to get to another theater and see the only other movie remotely starting at a convenient time, in this case 30 Minutes or Less. Sure, the previews were a bit iffy, but it had Jesse Eisenberg and Danny McBride, so it had to be fun, right?

WRONG. All I really need to say is it rivals Bad Teacher as the singular worst movie of the year. It is as insipid as it is idiotic, misogynistic as it is tedious. And those were the good scenes.

To the extent anyone cares, Eisenberg plays a pizza delivery guy whose business doesn’t charge if they can’t get there within 30 minutes of the order. (Perhaps those of you who belong to Mensa have already deduced where the title of this movie was derived.) His only apparent friend is a clueless goof played by Aziz Ansari, a substitute teacher who hates teaching. The only thing these two so-called heroes have in common is a complete absence of ambition.

Opposite them are Danny McBride and Nick Swardson, two oafish doofuses who decide that their ticket to fame is to kidnap an unsuspecting soul (possibly a pizza delivery man?), strap a bomb to him and force him rob a bank for their financial gain. While McBride can be very funny as seen in his TV series Eastbound and Down and in both Pineapple Express (2008) and Tropic Thunder (2008), his lack of apparent range leads him to frequently be far more grating than amusing (Think Land of the Lost (2009)and this year’s forgettable Your Highness).

Here, McBride is positively awful, and that is not good news when you are playing an already hateful character. Simply stated, the longer this movie lasts, the more wretched it becomes.

Finally, Mr. Eisenberg’s acting, particularly given his staccato style of speech, leads you to believe that he flunked out of Acting 101. While Eisenberg’s ability to embrace an introverted character suffering from a profound case of social awkwardness worked marvelously playing a multibillionaire in Social Network, it fails miserably here where he is a penniless pizza boy.

Though I am a great admirer of Director Ruben Fleischer’s Zombieland (2009), he takes a tragic step backward here. This movie has no style, charm or spirit. It is profoundly empty and dull, something that you are likely to feel by the time you leave the theater.