Though I reviewed this film several months ago, the killings in New Zealand and the Pittsburgh synagogue magnify its political significance. 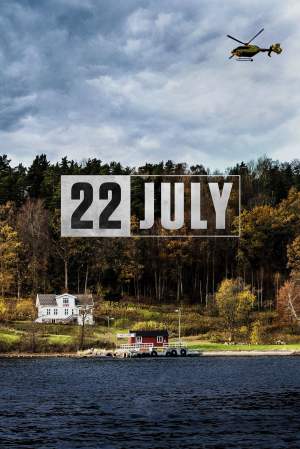 22 July, directed by the accomplished Paul Greenglass (the Bourne films and Captain Phillips) is a mesmerizing historical work that you have to take the time to see at home. It didn’t do well during its limited run in the theatres as reflected by the fact that I was the only one in the audience on the last day that it played here in Indianapolis.

The film is both understandable and unfortunate from a viewer’s perspective. It is understandable because it recreates the horrifying terrorist attack by one man on an island close to Oslo, Norway in 2011 that killed 77 counselors and teenagers while wounding over 200. It is unfortunate because who would really want to take time to experience such a monumental tragedy?

Well, in light of what just happened in Pittsburgh and New Zealand, anyone interested in history needs to watch this film as parts of it resonate around the world to this very day. In July of 2011 a smart, Norwegian, racist madman by the name of Anders Behring Breivik decided that his country of Norway was on the verge of collapse with its loose immigration policy. Feeling that he had to try to make a statement to save his own country, he first placed explosives in a van where he nearly destroyed a government ministry in Oslo. Immediately thereafter, he departed to a small island where he wanted to finish his work.

Like the New Zealand killer, it became obvious that Mr. Breivik was proud of what he was doing and he ventures to the island where numerous Norwegian teenagers are on a vacation. Pretending to be a police officer, he begins to destroy everyone that he sees after landing. As you watch young kids gunned down in buildings and as they clung to cliffs trying to hide, you experience a horror movie far more significant than the deaths shown in the recent Halloween film and in Us. While the first third of the movie centers on the unconscionable attack and the attempt of a kid named Viljar (Yonas Strand Gravli) as he fights to survive after being shot 5 times by Breivik, the remainder of the film focuses on his dance with death while Breivik prepares for trial.

Trial lawyers need to see this film as Breivik’s attorney had no idea why he was selected to represent him. However, he was dedicated to doing his job despite the fact of being vilified by the public and repeatedly receiving threats on his family. The attorney-client relationship is on full display in this film, and Mr. Breivik’s counsel did his best to see that he received a fair trial even though he personally disliked his client.

As noted, Breivik’s stated purpose in killing all of these kids was to oppose Norway’s accommodation to immigration and multiculturalism. He was clearly a white nationalist, as was the killer in New Zealand. Both of them referred to the United States as experiencing the same problem. What can’t be ignored about these multiple tragedies is that President Trump is fanning the flames that inspire racist hatred. Good grief, the New Zealand killer even cited Trump as someone he admired when it came to his dedication to white nationalism.

Notably, after the tragedy massacre in New Zealand our President talked with the New Zealand Prime Minister, asking what he could do. She told him to embrace Muslims as members of our national community that need the same protections as all other citizens. Our President did nothing in response, and I urge all of his supporters to hold him accountable.

In the end, you can’t encourage distrust, fear and hatred and then pretend that you didn’t light the fuse that resulted in these multiple tragedies listed above. Being elected to Congress is an honor that carries fundamental obligations. One of them is to not remain quiet when our President nurtures the support of a base that includes racist white nationalists.