How to Train Your Dragon: The Hidden World

Do yourself a favor and see this engaging film. It may very well win an animated Oscar in 2019. 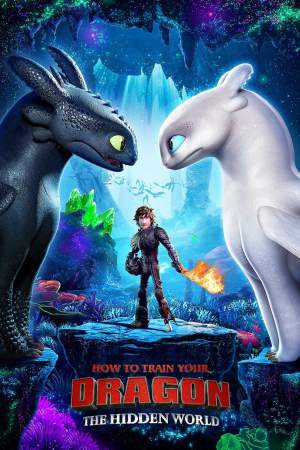 How to Train Your Dragon: The Hidden World will capture your attention from beginning to end. You are likely never to have seen such an emotionally powerful, heartbreaking animated story since that little deer lost his mother in Disney’s Bambi (1942).

In the same fashion as Peter Jackson concluded his Lord of the Rings saga with a final third film, Director Dean DeBlois achieves that same meaningful finale with his third dragon film. I both loved and admired the first two films released in 2010 and 2014, and this movie will bring tears to your eyes as the animated characters face the inevitable consequences of life that confront all of us in the real world.

Hiccup, voiced by Jay Baruschel, has emerged as a young Viking leader in the community known as Burk. Growing up as a teenager where he was taught by his father Stoick (Gerard Butler) to treat dragons as enemies that needed to be killed, he encounters a dragon known as the Night Fury that has a damaged tail that keeps him from flying. Hiccup names him Toothless, and a lifelong friendship develops between the two when the young dragon obtains an artificial tail that allows him to speed through the heavens.

With this film, the Vikings now live in a world that is dominated by the presence of dragons. Though they have learned to coexist with a certain degree of discomfort, Hiccup and his followers are forced to confront an enemy that seeks to kidnap and destroy all of the dragons on earth. The heartless marauders are led by Grimmel, magnificently embellished by the voice of F. Murray Abraham, and the Vikings must find a way to find a legendary Lost World where dragons live and prosper on their own.

However, please do not dismiss this movie as a simplistic animated film about an inevitable war. To the contrary, it captures romance in a fashion seldom seen in any animated film. It begins when Toothless falls in love with a white Night Fury and their relationship has as many ups and downs as Clark Gable and Vivian Leigh in Gone with the Wind (1939).

In addition, Hiccup has his own love, the engaging Astrid, voiced with spunk and style by America Ferrera. She is a determined young woman whose advice gives him the strength to succeed. There is nothing artificial about the relationships of either these dragons or Vikings, and their scenes together create an unparalleled magic that will leave all of you in a state of gleeful wonder.

But just as Frodo Baggins had to say goodbye to all of his friends as he was forced to sail into the twilight in the Lord of the Rings finale (2003), you know that Hiccup and Toothless are going to have to do the same thing. Hiccup remembers the advice he received from his father as a boy where he was told that life inevitably involved loss, and he knew that Toothless, his mate and all of the other dragons had to flee to the Lost World where they could be free of any brutality inflicted from the human world.

I’m giving nothing away to describe this moment that you clearly suspect is coming from the opening scene. As the characters cried and embraced on screen, I looked around and there wasn’t a dry eye in the movie theatre.

The Dragon movies remind all of us that saying goodbye to loved ones, be they humans or pets, is an inevitable consequence of the experience known as life. If we are to find any meaning in this existence we have to embrace the joy of each day knowing that these moments will eventually be remembered with pictures put in an album and kept in a special place at home.

← The Lego Movie 2: The Second Part
Fighting With My Family →