Eleven Days on an Alaska Cruise

I urge all of you to consider Seabourn if you are thinking about a cruise anywhere.  There are roughly 450 people on the ship, and most of them come from around the world.  You make friendships that will last for a long time. 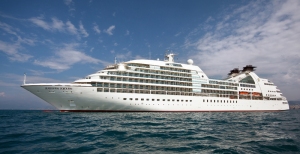 The Alaska Cruise on Seabourn ended about two weeks ago, but it remains a startlingly magnificent adventure that we will never forget.  While I didn’t allow myself to dwell on what to expect, each day was an adventure of a lifetime.

Mo and I flew into Vancouver the day before the cruise left, and that beautiful city had its own rewards.  Though we had been there before, it remains one of the most beautiful cities on Earth.  You owe it to yourselves to find a way to experience its rewards.

However, we left on our journey the next day, cruising the Queen Charlotte Sound for a day and a half.  The first place we docked was in Ketchikan, Alaska, where I convinced Mo to participate in a ziplining experience through a portion of the magnificent rain forest.  We were in the trees for close to an hour, transported on thin cables close to 150 feet above the ground.  There were eight ziplining trips from tree to tree, each time stopping on a small circular wooden platform where you held onto a tree that swayed in the wind.  There was a moment where Mo looked at me and said, “If we live, I’m going to get an Alaska lawyer to divorce you!”  I’m exaggerating a bit, but not much.

Our next stop was at a place called Rudyard Bay, located at a destination known as Misty Fjords.  There we journeyed on kayaks through an isthmus where seals appeared in the distance and dead salmon were on the shore after being consumed by local bears.

Our subsequent stops were then at Wrangell, Sitka, Haines and Juneau, Alaska.  At each stop we either ventured into the forest to watch Alaska bears leap into small tributaries to eat salmon to taking Zodiacs up rivers where we passed humpback whales and numerous seals lying on multiple inlets.  Each day brought a form of magic and excitement that exceeded the previous day’s joyful experience.

All of the above-mentioned towns are exceedingly small, including Juneau.  All of them cater to the cruise traffic, and you had to pass numerous jewelry shops to hunt down local souvenirs of interest.  Let me just say that in Juneau there was a crab shack on the beach where we had lunch that is etched in our memory.  We purchased a crab leg for a little less than $20, a crab leg that was two and a half feet long and two inches in diameter at its base.  It was a full, spectacular meal that was worth every penny.

Though there were other great experiences, let me end with a reference to three of them.  The first was a journey on a small boat outside of Wrangell where we visited a small island that was a product of a volcano rising from under the sea.  It was nearly perpendicular in most of its dimensions and it was the home of tens of thousands of various birds.  It was breathtaking.

And then there was the Zodiac trip we took at a place called Inian Island. We went up a small estuary that was filled with both small and large floating ice.  We maneuvered to the base of a glacier which turned blue after being hit by the sun.  On adjoining pieces of frozen ice rested hundreds of seals.  Need I say more?

Lastly, there was the weather that enabled us to experience a journey denied to many others in September.  With the exception of mild rain on two days, each day was sunny with the temperature fluctuating between the mid 50’s and the mid 60’s.  While you always took some form of rain jacket on the daily trips up rivers and into the forest, it was so comfortable that you frequently had to simply wrap it around your waist.

Which leads to the last night on the trip before we docked in Seward.  Right before dinner on the ship (there were three separate restaurants), an announcement was made and it was expected that everyone could see the Aurora Borealis appear that early morning.  As a result, we were told that if we were interested we should tell the Captain that they should call our room at three o’clock in the morning.  We did so.  When the phone rang at three, we journey out of bed onto our private deck to look out at a clear sky completely filled with the Aurora Borealis.  It streaked from one end of the sky to the other displaying thousands of stars.  What a way to say goodbye to Alaska.