The film’s unanswered question: “How could a 1979 graduate of Oxford go on a solo journey to Greece and not contemplate the use of birth control?” 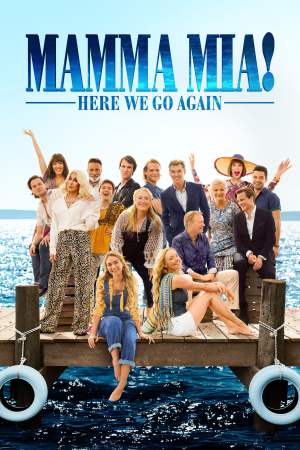 Momma Mia! Here We Go Again is a film about women for women.  When I followed my normal ritual and saw it alone, I was surrounded by a large female audience.

Though this is far from a great film, it has its own rewards.  To begin with, nearly all of the adult men are functional idiots, something that I assume most women have encountered a time or two in their journey through life.

As most of you know, the original film told the story of Donna Sheridan, a woman running a small hotel for tourists on a Greek island.  While she was proud of her young daughter, she acknowledged that three men were possible fathers.  Though the premise seemed a bit preposterous, Meryl Streep’s role as Donna made this movie work from beginning to end.

Years later, Donna has tragically died, and her daughter Sophie (Amanda Seyfried) is attempting to rebuild her mother’s resort and hold a gigantic opening celebration.  In the process, the film involves flashbacks to 1979 when the young Ms. Sheridan was graduating from Oxford University.  The story follows her as she embarks on a solo journey towards Greece, and in the process she begins three quick relationships with men that result in her pregnancy.

The strength of the film is largely found in these flashbacks, beginning with a captivating performance by Lily James as the young Donna.  This is a magnetic young actress, and she displays some great singing skills as we once again hear a variety of ABBA songs.  And if you doubt Ms. James’ skills, then look for her starring role in Cinderella (2015), the zombie Killer in the underrated Pride and Prejudice and Zombies (2016), her tantalizing role as a waitress in last year’s magnificent Baby Driver, her wonderful performance as Churchill’s secretary in the film Darkest Hour, the movie that won Gary Oldman his Oscar, and her largely ignored contribution to this year’s Sorry to Bother You where she provided Tessa Thompson with her British white voice.

The admitted problems with the film first involved the lackluster performance by the talented actors playing the aging three fathers.  Though we were fortunately spared having to listen to Mr. Brosnan sing a lengthy solo, he, Stellan  Skarsgård and Colin Firth appear to be little more than hopeless characters mesmerized by the memory of a woman that they may have impregnated years earlier.  This was all the more disappointing given that the young men who played them when they first met Donna, Jeremy Irvine, Josh Dylan and Hugh Skinner, do a fine job as the three lads who fell in love with Donna both before and after they ended up in bed with her.

Additionally, the film is enormously helped by the performances of Julie Walters and Christine Baranski as Donna’s old friends, Rosie and Tanya.  Rosie breaks down in tears every time she hears Donna’s name mentioned while Tanya again is quite funny as a woman with an acerbic eye on her next male conquest.  I should also note that Alexa Davies and Jessica Keenan Wynn are also splendid playing Rosie and Tanya as young college cohorts of Donna, and the performance of the three of them as they sang and danced at their college graduation at the beginning of the film is a highlight that you are likely to remember.

While Ms. Seyfried’s performance as Sophie is formulistic at nearly every turn, her interaction with Ms. Streep at the end of the film will bring you to the edge of tears.  As she brings her own child for a christening at the hotel, she alone sees her late adoring mother as they sing one of the movie’s best songs, “My Love, My Life”.

Furthermore, that special moment helped you quickly forget the unfortunate appearance by Cher late in the film as Sophie’s distant grandmother.  Though she recreates a bit of her own legend as she sings ABBA’s “Fernando” to the hotel manager played by Andy Garcia, you are left assuming that Sophie is secretly wishing that her grandmother quickly flies back to Las Vegas where she has been ensconced for the last several decades.

← Leave No Trace
The Equalizer 2 →