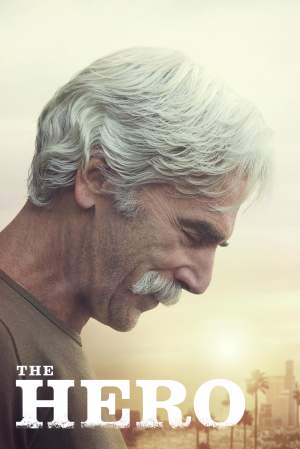 The Hero is a stirring little film (1 hour, 33 minutes) centering on the travails of growing old. Sam Eliott dominates the movie as Lee Hayden, a 71-year-old actor whose best days are in his rearview mirror. Learning that he has pancreatic cancer, he is left struggling as he seeks to make up for past mistakes.

Mr. Eliott is actually 72 years old, so he has to wear no makeup to play Mr. Hayden. With his booming, recognizable voice, he is left taping commercials for radio and TV as he tries to find another role for the big screen.

In the process, you watch as he reconnects with his ex-wife and long forgotten 34-year-old daughter, characters that skirt the periphery of the film though admirable played by both Katherine Ross and Krysten Ritter. However, Laura Prepon steals the film as a stand-up comic who finds an attraction to a man twice her age.

While Hayden can’t figure out why this young woman would want to have a relationship with him, she sarcastically throws their difference in ages back in his face. As she puts it, if it really bothers him, she’ll simply leave.

At its heart, the film functions as more of a two character play. I should note that Nick Offerman is very funny in a role as an acting buddy of Hayden who now has become a pot dealer. Our two friends spend most of their time getting stoned which allows Hayden to remember his last major performance in a western with the name of this film.

Having turned 70 last December, it wasn’t hard for me to connect on a personal level with this movie. While I am clearly aware that well known political leaders like our President, Nancy Pelosi and Bernie Sanders are all over 70, it is hard not to imagine that you are on the downside of life’s Bell Curve. Like many professional people my age, you still fight to make meaningful contributions to mankind as you inevitably watch life’s ending storm cloud getting increasingly closer.