This is one of those films where the previews make it seem more appealing than the actual film itself. 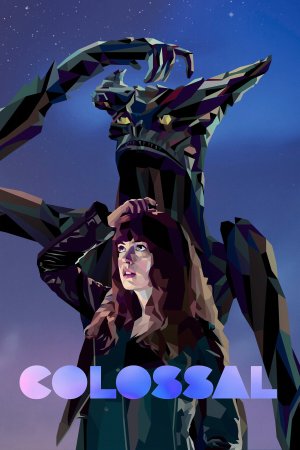 Quite honestly, I thought a better title for this film would have been Bitchy and the Beast. Dan Stevens, who played the beast in the great Disney film, plays Anne Hathaway’s fed-up boyfriend in this movie, and Ms. Hathaway’s character is the polar opposite of Emma Watson.

To begin with, Ms. Hathaway’s Gloria is a complete mess. She continually arrives at her New York apartment hung over and with little memory of her actions the night before, and Tim, her boyfriend, finally has had enough. He sends her packing and she retreats to a small town where she grew up in the hope of finding salvation.

Unfortunately, Gloria finds little relief from her love of alcohol as she quickly meets Oscar (Jason Sudeikis), an old school friend from long ago. He owns an old bar previously run by his deceased parents, and he makes the mistake of offering an alcoholic a job as a waitress. It produces expected results.

The strength and weakness of the film flows from Gloria’s discovery of her mysterious relationship to Godzilla-type monster on the loose in Korea. While she tries to figure out what in the hell is going on, things take a nasty turn when a robotic monster also appears in Seoul that parallels the actions and attitude of Mr. Sudeikis.

As expected, Ms. Hathaway does a wonderful job playing the central character in a film that is really about human dysfunction in a world gone mad. At its heart, this is a science fiction film, and Ms. Hathaway’s personal problems are magnified when she discovers that the monster on the loose in Korea starts to mimic all of her actions when she appears in a certain location opposite an elementary school.

For a brief period of time the movie creates a mysterious force that is fun to watch. However, the film’s problems flow from the fact that Mr. Sudeikis and Ms. Hathaway gradually discover that a profound sense of animosity lurks under the surface going back to their childhood. As they gradually begin to torment each other, the monsters in Korea start to do the same thing.

I must note the expected wonderful performance from Tim Blake Nelson. He is one of the bar patrons who continually hangs around our lead characters, and he is an interesting actor to watch in all of his roles. You need to look no further than his unforgettable performance in the Coen brothers’ film,  O Brother, Where Art Thou (2000).

Unfortunately, by the end of this film the only characters that you really like are the monsters. Though Ms. Hathaway’s Gloria is both bitchy and beautiful, just remember to walk away from her if she offers to buy you a beer.

← Their Finest
Guardians of the Galaxy Vol. 2 →