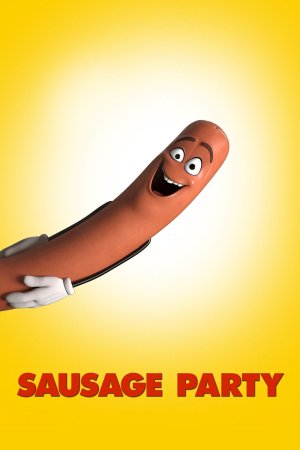 Sausage Party is an R rated animated film from the twisted, creative minds of Seth Rogen, Jonah Hill, and James Franco.  Both funny and offensive, it has an underlying meaningful story drowning in a tidal wave of profanity.

90% of the film takes place in a supermarket where all of the merchandise, food, and produce can communicate without being noticed by humans. They all hoped to be purchased by humans to be taken to a joyful, new life in the next world called “The Great Beyond”.

Seth Rogen voices a frankfurter called Frank, and he loves Brenda, a nearby bun (Kristen Wiig).  They yearn to be purchased by the same shopper so that they can consummate their relationship in a wiener/bun fashion that we all recognize.

Trouble ensues when a mustard jar (Danny McBride) is returned to the store. He screams out the tragic story concerning the cannibalistic outcome awaiting everyone.  Frank and his cohorts engage in a quest inside the store to determine the truth while most of his cohorts refuse to see anything but joy awaiting their ultimate purchase.

I must note that the constant use of four letter words tends to fall on deaf ears.  Additionally, the drawn out ending involving the store merchandise engaging in various forms of sexual interplay is shockingly pedestrian.  Rogen and Hill may find it quite funny, but it will leave you at best shaking your head.

Nonetheless, the film does have some strength at its core.  As you watch the interaction of the various goods on the store shelves, you see a mixture of resentment and dislike.  Just like in real life, the food products have to determine if they are being asked to pursue a religious fantasy.  Additionally, they have to bond together to provide the core source of happiness in life, namely hope.

This is one of those films that I can neither recommend nor condemn.  On the other hand, what if there is an afterlife where your soul enters the Kingdom of Heaven.  But what if God and her bevy of angels treat you like a carrot on a humus tray?  Worried?