Eye in the Sky

In war, is the cost of taking an innocent life worth saving other innocent lives? 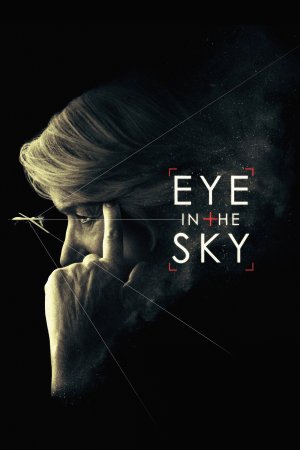 Like many, I was quite intrigued by the previews for Director Gavin Hood’s Eye in the Sky. Unfortunately, the film itself turns out to be terribly disappointing, and I can only quote my sarcastic good friend who sat next to me, “If you give this film a good review, I’ll kill you.”

Helen Mirren, the accomplished English actress, plays Colonel Katherine Powell, a no nonsense member of a secret intelligence organization out of London whose goal is to either capture or kill notable terrorists. Locating two chief targets in a rundown building in Kenya, she calls in a drone strike given the discovery that an imminent terrorist attack is about to be unleashed.

Up to this point, the movie is terribly intriguing, as it both focuses on life in the nearby Kenyan community as well as sophisticated drones shaped like hummingbirds and flying beetles that are used to further the investigation. More to the point, a kill zone is established until a young Kenyan girl is seen outside the target facility selling bread made by her mother.

Everyone associated with Ms. Mirren is thrown into confusion. The American pilot (Aaron Paul) whose hand is on the trigger doesn’t want to proceed and risk killing the child. Ms. Mirren’s supervisors, led by the late, great Alan Rickman, are left in a quandary when British political figures want to scratch the entire operation.

Quite frankly, it is here that the movie collapses under its own weight. In scene after scene you are forced to endure moments where government officials move up the chain of command to escape responsibility. Regrettably, it becomes annoying to watch Ms. Mirren and Mr. Rickman driven to the point of madness.

The film’s profound weakness is that it challenges everyone to ignore history. War has always been hell, and it has involved collateral damage at every turn. Think of World War II and the bombing of Dresden where tens of thousands of German civilians were killed by the Allied air attack. Close to  150,000 Japanese citizens died when atomic bombs were dropped on Hiroshima and Nagasaki, yet most Americans to this day consider those attacks justified in that it brought that awful war to a close.

Don’t get me wrong, the performance by Aisha Takow as the little girl is as moving as it is endearing, as is Barkhad Abdi as an undercover operative who is trying to save her life. He is as effective here as he was in his classic role in Captain Phillips (2013).

Nonetheless, the film became rather foolish when it seemed to urge the viewer to save a little girl’s life and let terrorists flee to kill numerous innocent human beings as happened recently in Pakistan, Paris and Brussels. War always has costs, and you can’t tell me that innocent people didn’t die on the evening we eliminated Osama bin Laden.

George C. Scott’s General Patton said long ago, “The point of war is to kill the enemy before the poor SOB kills you.” Patton (1970).