Why remember history? See Trumbo and find out. 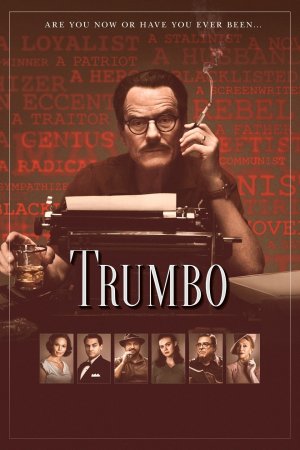 Trumbo is a study in American history that should not be forgotten. In the late 1940s, our national government, led by the House Republicans on the Unamerican Activities Committee, led a campaign to demonize American citizens who associated with the Communist Party.

Gaining the attention of the national press, this committee soon directed their attention on Hollywood. In the process, they focused on what became known as the “Hollywood Ten”, all but ruining the careers of respected screenwriters. As you watch this film unfold it is impossible not to be reminded of the attempt of present day House Republicans to destroy the career of Hillary Clinton with their misguided focus on Benghazi.

Dalton Trumbo, here played by Bryan Cranston in a mesmerizing performance, was one of Hollywood’s top screenwriters who refused to buckle under political pressure. Subpoenaed to testify in Washington along with friends that included Arlen Hird (a wonderful performance by Louis C.K.), these gentlemen refused to name names and were subsequently sentenced to serve time in federal prison.

Trumbo’s attempt to fight in the name of justice nearly cost him his livelihood . After being released from prison, his wife (Diane Lane) stood by him with their two children even though they had to sell the farm that they cherished. Trumbo was not a guy who would retreat peacefully.

As Hollywood moguls caved in to the right wing onslaught led by columnist Hedda Hopper and actor John Wayne, Trumbo made a small living under assumed names. He wrote numerous scripts for a movie producer (John Goodman) who specialized in cheesy horror films in order to put food on his table. In addition, he wrote scripts for Roman Holiday (1953) and The Brave One (1956) where he won Oscars despite the fact that he hid behind surnames.

Director Jay Roach’s film reaches its zenith when actor Kirk Douglas (Dean O’Gorman) insists that Trumbo be credited for his script for the memorable Spartacus (1960). Followed by Director Otto Preminger (Christian Berkel) insisting on the same recognition for Exodus (1960), Trumbo was able to regain some status despite the carnage being left by Congressman McCarthy in Washington.

I must admit that I consider this movie a masterpiece in part given the performance of Helen Mirren as the regrettable Hedda Hopper. Ms. Hopper’s diatribes were reminiscent of what we are watching play out across this country today from self-appointed pundits like Rush Limbaugh, Sean Hannity and Bill O’Reilly. Here in Indianapolis we are deluged by a string of ideologues on local radio ranging from Tony Katz to Chicks on the Right, and their daily derision of President Obama is a reminder of the assault suffered by Trumbo and his comrades.

It is worth remembering that Kirk Douglas is still alive at the age of 98. I can’t help but feel that he finds a disturbing similarity between our country’s attempt to demonize Syrian refugees in the same fashion that we tried to scar communists in the 1950s.