I wish Hollywood would remember the importance of bringing non-fiction to the screen. 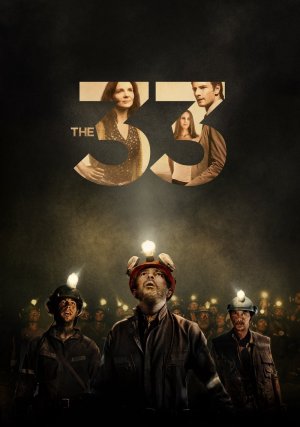 As a student of history going back to my college years when I majored in that subject, it is always rewarding to find a film based on actual events.  Spielberg’s Bridge of Spies proved that point, and director Patricia Riggen’s The 33 achieves that same end.

As noted at the start of the movie, 12,000 miners die every year across our globe.  Black Lung disease killed thousands of miners in our own country, and few cared at the time as long as they dug enough coal to keep our homes warm during the winter.

In 33, you see the story of 33 Chilean miners trapped thousands of feet below the surface in 2010 when a mine collapsed.  They stayed alive for 69 days before being rescued, and their families unrelenting protest at the mining site galvanized the media to transport this story around the world.

With a couple of exceptions that worked surprisingly well, most of the actors are Hispanic.  Though he is easy to dismiss, Antonio Banderas gives a commanding performance as a miner who establishes order to ration both food and water as our boys try to survive.   It is easy to overlook the talent of Mr. Banderas, but hunt him down in both The Mask of Zorro (1998) and The Skin I Live In (2011) if you doubt his talents.

In addition, Lou Diamond Phillips adds strength to the film, here playing a miner in charge of monitoring safety.  He sensed something was wrong from the beginning, but his mining supervisor simply ordered him to shut up and produce some copper and gold.

What brings some moral force to the film comes from the performance of Rodrigo Santoro, here playing a young member of the Chilean government.  Sure, he wants to help preserve his President’s reputation for caring for the common man, but he remains at the mining site for over 2 months dedicated to finding a way to return the miners to their families.  Mr. Santoro proves to be an excellent actor, and there are moments when he appears to be the twin brother of the established star Gael García Bernal.

However, the heart and soul of this film flows from the performances of the mothers, sisters, and wives who formed a vigil at the mine where they made their voices heard.  Playing a powerful role in this movement was a daring performance by Juliette Binoche, here playing a Chilean sister of one of the miners.  Ms. Binoche’s accomplishments as an actress are reflected by the fact that she has a perfect Spanish accent.

Finally, I can’t overlook the role played by Gabriel Byrne, here giving a captivating performance as the drilling expert assigned to try and save the miners.  The beauty of Mr. Byrne’s acting talent flows from the simple fact that he never tries to dominate any scene.  Though he is frustrated to the point of giving up hope, he never quits.  And if you really need to see Mr. Byrne in a performance for the ages, then hunt down Into the West (1992) and you will know exactly what I mean.

I must say that the ending of the film reminded me of the magic reflected in McFarland, USA, a quiet film released earlier this year.  Similar to that wonderful movie where you saw the real life characters portrayed on the screen where you could admire their accomplishments as many graduated from college, here you see the actual 33 miners form a band of brothers where they still get together to share their remarkable accomplishment.  Even though their mining company denied them any compensation for their ordeal, these gentlemen deserved to be remembered.