This extraordinary film is a reminder that it is time that our country give women complete control over their own bodies. 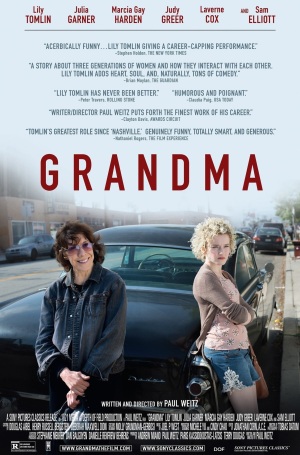 This magnificent film begins with an 18-year old girl showing up on her lesbian grandmother’s porch asking to borrow $600 for an abortion. The grandmother, already disgusted with a life that has all but lost meaning, proceeds to take her on a car trip to hunt down the money so that she can arrive on time for her procedure later in the afternoon.

Thus begins the brilliant film Grandma, which is funny, profane and enormously relevant to America in 2015. Lily Tomlin is positively brilliant in her role as Elle Reid, a woman who is still wrestling over the loss of her longtime partner who recently died. Though she has been living with a spirited young woman, Olivia (Judy Greer), for the past four months, she chooses to dismiss her in much the same fashion as firing an employee.

Yet chaos waits at her front door with the arrival of her granddaughter, Sage, played in heartwarming style by Julia Garner. Lacking the money to help her, Elle decides to explore old haunts to try to raise the appropriate funds.

Problems exist from the very beginning, starting with her old, dilapidated car. Her trip involves stopping at the home of an old boyfriend, Karl (another meaningful performance by Sam Elliott), who she left without notice decades ago. While each stop involves borderline hysterical moments at every turn, wait until you see her confront the boyfriend of her pregnant granddaughter. He is a first class arrogant little prick, and Ms. Tomlin leaves him wishing that he had never called her a bitch.

This film by the talented Writer/Director Paul Weitz has many strengths, not the least of which is forcing the audience to pay attention to the emotional trauma faced by any woman contemplating an abortion. Always traumatic and never easy, it becomes readily apparent why the anti-abortion movement is led primarily by men who will never have to experience pregnancy. As Ms. Tomlin points out in devastating fashion, men wouldn’t oppose abortion if faced with the possibility of carrying a large watermelon in their stomach for nine months following intercourse.

Another reason why this movie teeters on the edge of greatness are the moments involving Elle’s need to confront her own uncaring daughter for some cash. Marsha Gay Harden is wonderful in that role, and it is a joy to watch grandmother, mother and daughter reunite as they confront a family tragedy.

This is an astonishing movie, and I give nothing away by encouraging you to watch for Ms. Tomlin’s encounter with abortion protesters at the clinic as they arrive. It is, in my humble opinion, an epic moment on screen, and it makes you hope that we Americans can reach the point where women are treated the same as men, namely given the ability to make all decisions concerning their bodies.