This is a wonderfully entertaining film that will quickly wrap you around its little finger. And did I mention that the musical score is also sensational? 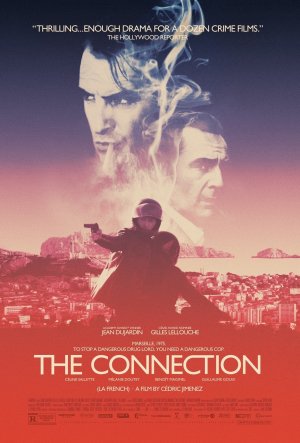 The Connection is a powerful French film (in subtitles) that should not be missed. Directed by Cédric Jiminez, it is a first-class crime drama dealing with heroin traffickers dominating Marseilles in the 1970s.

The organization was known as The French Connection, and it already hit the screen here in the United States years ago (1971) in a movie with the same name. To give you some idea of what you are in for, this French mafia organization rivaled the one portrayed so wonderfully in Francis Ford Coppola’s The Godfather films.

The Connection dominated nearly every aspect of Marseilles’s political structure during this period of time. Importing its opium largely from Turkey, they ran massive labs where they produced heroin that was 98% pure. They had an intricate system set up to smuggle the heroin into the United States in large quantities, and no one dared oppose them. If you did in any manner, you were quickly found gunned down on some street in Marseilles.

With the police department virtually paralyzed by the inaction of superiors, a local, respected juvenile magistrate was put in charge of the investigating team. He was simply referred to by everyone as “the Magistrate”, and those in control of the French Connection soon realized that there was a dedicated wolf on their trail.

Jean Dujardin gives a remarkable performance as the Magistrate, and most of you will remember him for his Oscar-winning performance in The Artist (2011). A family man dedicated to his intelligent, caring wife Jacqueline (Céline Sallette) and their two children, he fears nothing given his devotion to the cause of honesty and justice.

Opposite him is Gaëtan “Tany” Zampa, the dictatorial head of The Connection. He runs his illegal monopoly with a violent hand, and anyone, and I mean anyone, whose loyalty is questioned is quickly eliminated.

Gilles Lellouche plays Zampa, and his performance is as sensational as Dujardin’s. He shares one thing in common with his opponent, namely a dedication to his wife Christiane (Mélanie Doutey) and their children. Here is a guy making a fortune distributing heroin around the world while simultaneously finding comfort and joy in the arms of his wife.

As the Magistrate makes a bit of progress, he constantly runs into obstacles, most of them coming from his own team. As tension mounts on both sides as The Connection begins to be threatened, the Magistrate’s wife begins to worry about the safety of her family. She deeply admires her husband and his quest, but how tough would it be for this mob to eliminate a pursuer who never seems to flinch while trying to hunt them down.

This is a film filled with both romance and violent intrigue, and it is all the more captivating because it is based on a true story. Zampa and the Magistrate are bound to tangle, so buy a ticket and enjoy the ride.

One thought on “The Connection”