This is a film that makes most lawyers look bad unless you rely on ineptitude as a strength. On the other hand, maybe that would qualify all of us to be Super Lawyers! 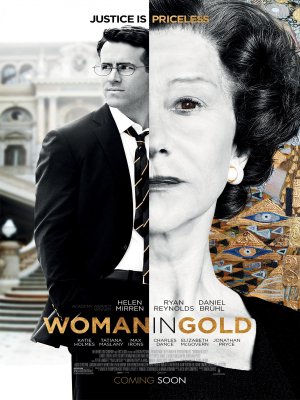 It is a pity that this film didn’t match the splendid performance by the great Helen Mirren. It robs itself of its own glory, and Director Simon Curtis left a splendid movie lying somewhere on the cutting room floor.

The film follows the story of Maria Altman, played by Ms. Mirren, an immigrant who fled to America following the Nazi annexation of Austria in 1938. Coming from a wealthy Jewish family, she lost many relatives and friends in the despicable Nazi onslaught.

Following the death of a cousin here in the States, she also discovered that a painting stolen by the Gestapo from her family home was on full display in an Austrian museum. An impeccably dressed octogenarian who still looks beautiful as she runs a small clothing store in Los Angeles, Ms. Altman seeks legal advice to determine if there is any way to have the painting returned to her.

It is an intriguing plot, particularly since it is based on a true story. Furthermore, the film repeatedly relives the turmoil taking place in Austria under the Nazis, and this is when the film is at its best.

The younger Ms. Altman is played by Tatiana Maslany, and the suffering of many Austrian Jews is dramatically displayed. Ms. Altman will never forget the fantastic dance taking place in her home during her marriage, and no one in the audience will forget it either. As a student of history who has read a great deal about World War II, these lost moments in Ms. Altman’s past will crush your heart.

However, the film loses its strength when it deals with the legal proceedings being waged on Ms. Altman’s behalf both in Austria and the United States. Ryan Reynolds plays Randol Schoenberg, a rather dysfunctional American lawyer with Austrian grandparents who is largely devoid of anything resembling a personality. Katie Holmes plays his doting, pregnant wife and it appears at times that she is suffering from post traumatic stress disorder after leaving Tom Cruise.

On the other hand, Daniel Brühl adds some punch as an Austrian newspaperman trying to help Ms. Altman for unknown reasons. As he previously displayed in the underrated Rush (2013) where he played Niki Lauda, he is a talented young actor with great potential.

However, this movie begins and ends with the performance of Ms. Mirren. Everything she touches on screen turns to instant gold, and she is an acting treasure to be honored.