It is time we recognize the profound harm that we continue to inflict on our own citizens, particularly homosexuals. To quote an old Buffy St. Marie song, “Do it in the name of heaven, you can justify it in the end.” 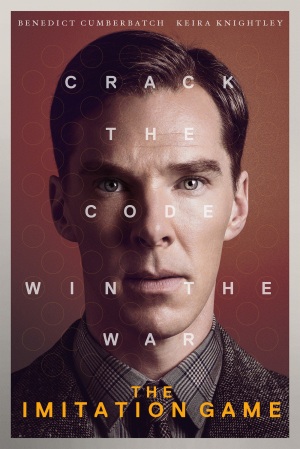 There have been a number of very good movies this year, but only several that would qualify as exceptional. Director Morton Tyldum has brought us one that is close to a masterpiece with The Imitation Game. Reliving life in London as seen through the eyes of an Englishman protecting his sexuality before, during and after World War II, it is a film that resonates to this very day.

The movie focuses on the emotionally tortured English mathematician Alan Turing, the man who played the leading role in cracking the Nazi’s Enigma Code during World War II. Socially inept and devoid of any concept of how to form a friendship, he develops the world’s first computer as he leads a top-secret government crew at Bletchley Park to try to end that savage conflict.

The film explores three periods of Turing’s life. It begins in 1951, when he is being investigated by the English government because of his homosexuality. With his role as a war hero remaining completely disguised by his own government, he ends up being prosecuted based on nothing more than his sexuality.

The film then covers a period spanning 1939 through 1942, where Turing’s team rallies around him despite the fact that he is profoundly unlikable. It is here where the screenplay by Graham Morton becomes as poignant as it is biting, causing you to share the travails of Turing and his group.

The third segment of this mighty film involves Turing as a young student concentrating on math. Taking place in the 1920s, he is played by Alex Lawther in a role that will capture your heart.

Benedict Cumberbatch’s recreation of the complex Mr. Turing is certain to be recognized at Oscar time. Though a math genius, he literally doesn’t know how to say “Hi” or “Thank you”. And yet despite his shortcomings, you end up embracing Cumberbatch’s Turing in the same manner that you would an emotionally disturbed yet loveable young relative.

Keira Knightley stands toe-to-toe with Cumberbatch, here playing Joan Clarke, the only female member of the clandestine group. Trying to make a name for herself at a time when women were generally offered a back seat on society’s bus, she matches her performance in this year’s Begin Again. She deserves an Oscar nomination for either film.

There are a number of other superlative performances that have to be mentioned. It begins with Matthew Goode’s exceptional contribution as Hugh Alexander, one of the leaders of Turing’s team. Initially despising Turing for being a leader who couldn’t lead, he eventually sees the significance of always protecting Turing’s back.

Other memorable performances come from Charles Dance, here playing Commander Dennison, and Mark Strong as the Intelligence Chief Stewart Menzies. Reporting only to Prime Minister Winston Churchill, Dance dominates every scene as a man who had both the courage to hire Turing and thereafter longed to do little more than fire him. Strong’s Menzies is smart enough to recognize Turing as the one man who could shorten this war, yet he also orders Turing’s machine (named Christopher by Turing) and all associated documents destroyed following VE Day. Thanks to him, the entire group matriculates back into English society where no one has the slightest idea of their accomplishments.

If you have spoken to anyone who has seen The Imitation Game, I’m sure all of them have stressed how they cried at various times during the last portion of the film. An eccentric math teacher in post-war London, Turing is caught in an unlawful sexual act where he is prosecuted and forced to experience chemical castration. Living alone with a reconstructed computer (again called Christopher) as his only close friend, the moment when Ms. Knightley surprises him with a visit is far too emotionally crushing to describe.

It is interesting that two of the best movies released in 2014 are films dealing with public condemnation of homosexuals in London as late as 1984. In both The Imitation Game and Pride, we watch citizens of the Western world suffer discrimination by their own government based on nothing more than their sexuality.

Politicians in Indiana who are proposing legislation to allow similar discrimination against gays in 2015 should see these two movies. We remain our own worst enemies if we don’t finally recognize that all citizens deserve equal treatment under the law.